I did something I wasn’t quite sure I would ever do last Friday – I ran a 10k! 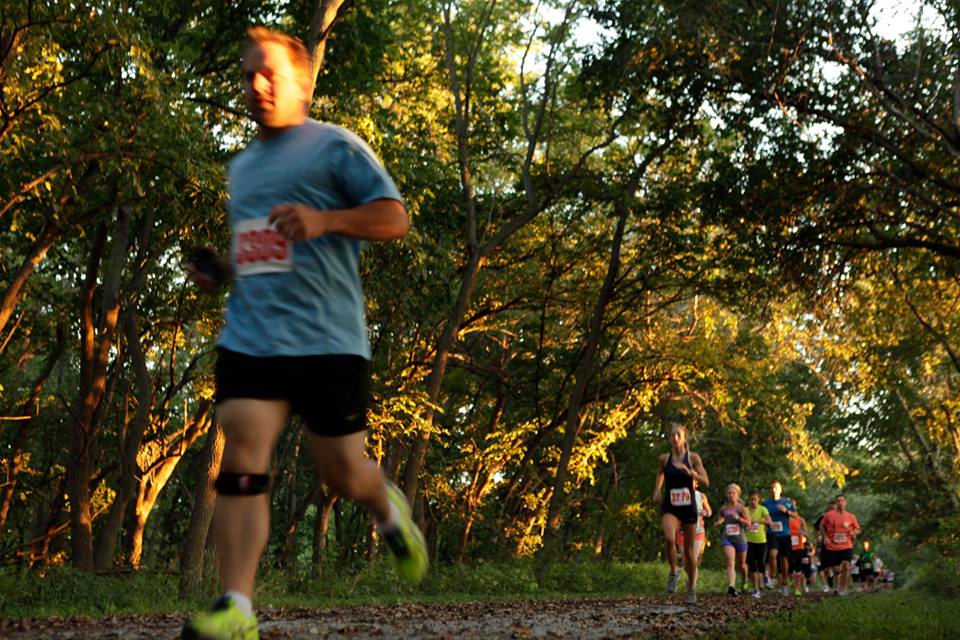 A few months back Josh told me about the Harvest Moon Hustle. It’s a nighttime trail run that is billed as, “fast, flat, and in the dark.” Josh loves trail runs even more than I do (which says a lot!), and has been really working on building up his mileage. When he asked me if I wanted to do it I said sure. In my mind it was months away and I had plenty of time to build up to a 10k. (My typical run is a 5k.)

The day of the race, I was a little less than excited. These past few weeks I have been so exhausted I haven’t been able to work out, and here I was about to do my biggest workout to date. (I just got blood work done to figure out what the heck is going on.) Add to that the Scandal party the night before where a few too many glasses of wine had been consumed. I wasn’t sure what to expect, but I laced up my running shoes and hoped for the best.

Further hilarity ensued as we travelled to the race. The race was put on by the running club BRIN (Born and Raced in Nebraska) and this race was about 40 miles away from Omaha in the middle of the boonies. We were driving down a one lane dirt road for 5 miles at one point with corn all around us as far as the eye could see. Josh and I laughed as we realized that we were finally getting to see stereotypical Nebraska. While it was beautiful, not all of Nebraska is cornfields.

When we finally made it to the race we were five minutes out from the start. We raced to check in and had to store our t-shirts ad race bags under a trailer since we didn’t have time to run back to the car. We then had to assemble our head lights and attach our bibs. Josh then decided he absolutely had to go to the bathroom before running, so while I lined up with the crowds he ran over to the port-a-pottys.

When the gun went off Josh wasn’t back and I realized there was no phone service where we were. I don’t download music but play it off of Pandora and iHeartRadio. My plan for this run since I was totally unprepared for it was to run a song and then walk a song, repeating for duration of the race. I realized that plan was out the window, stuffed my phone in my bra, and decided to run for as long as I could. I started in the way back of the pack so I wouldn’t get caught in all the initial congestion and get swept up running faster than I wanted to start. It was perfect. I had lots of space to do my own thing.

After a quarter of a mile Josh raced up to me and let me know he sprinted to catch up as he didn’t get out of the bathroom until all the racers had run into the woods. He ran with me for a little bit before taking off down the path.

The race was absolutely beautiful. We were on a tree covered dirt path with farms, fields, and a golf course next to us. I’m so glad my music didn’t work because I got to hear the sounds of nature and focus on my breathing.

About a mile in I realized that I was feeling really good. My legs didn’t hurt, I wasn’t tired, and I realized I was actually going to be able to run a 10k. It’s amazing to me how mental running can be. With 5ks I’ve ran in the past getting to 3.1 miles seemed like such a distance. As soon as I told myself I was running a 10k it’s like my mind shifted and I felt like 3 miles was nothing.

BRIN is an amazing running club. There was crowd support (lots of little kids wanting to give high fives!), the trails were clearly marked, there was a cap on the amount of runners so it wasn’t too crowded, and there were water stations every mile and a half or so. I was so happy the entire run and in a really good place mentally and physically. I remember smiling as I ran and just enjoying the view around me.

A little over halfway into the course I had to turn on my headlight as the sun had set and the trail was dark. I found a headlight very easy to run with, although I didn’t realize there was multiple settings so I ran with the lights on low for a good 15 minutes before I realized I could make it brighter. 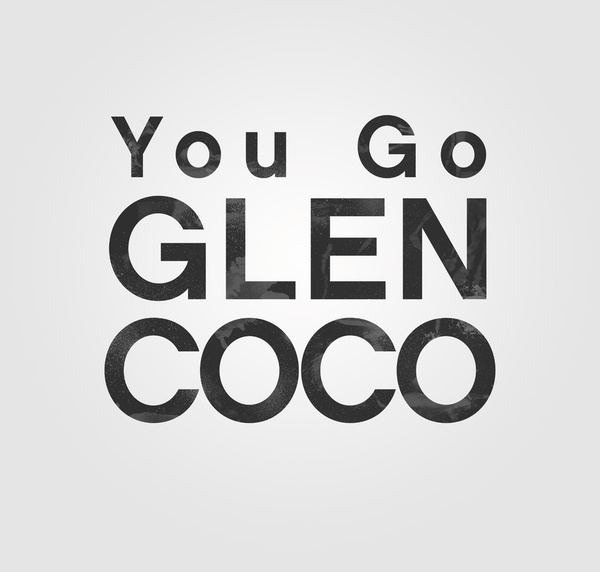 This is going to sound so dorky but my running mantra for the entire race was, “You Go Glen Coco!” It sounds dumb but it brought a smile to my face and kept me motivated for the entire race. A club race is different from my typical races in that this event had lots of elite and above-average runners. There was no one running who seemed like they woke up and decided to do a 10k that day. When I run 5ks I’m used to having quite a few people behind me. At this race I finished with six people behind me. Whenever I started to feel like, “wow, I don’t look like any of the runners here,” or, “I wonder if the girl I just passed is mad that a chubby girl is in front of her, ” I reminded myself that I was having a good race, doing awesome, and achieving something I had wanted to do for a long time. And then I told myself, “You go Glen Coco!” for good measure. 😀 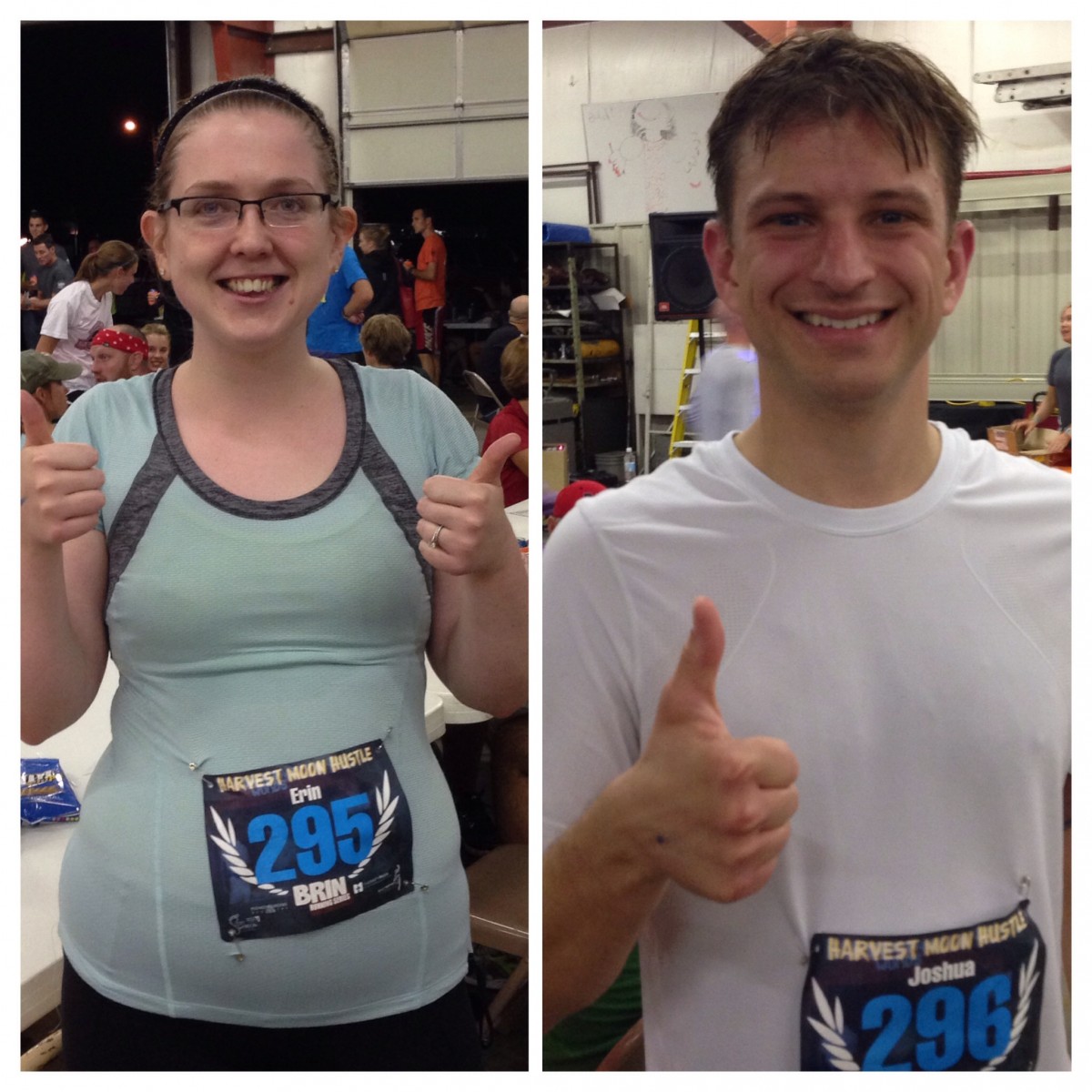 When I got to the finish line I had energy to speed up. This never happens. There was a big crowd, the announcer congratulated me, and I got to run into Josh’s arms. It was the best finish.

Sidenote: I could have swore I heard people saying, “Go Erin!” as I ran. I figured I was crazy because there was no way they knew my name. When I saw this picture afterwords I realized our bibs had our names on them. Duh. 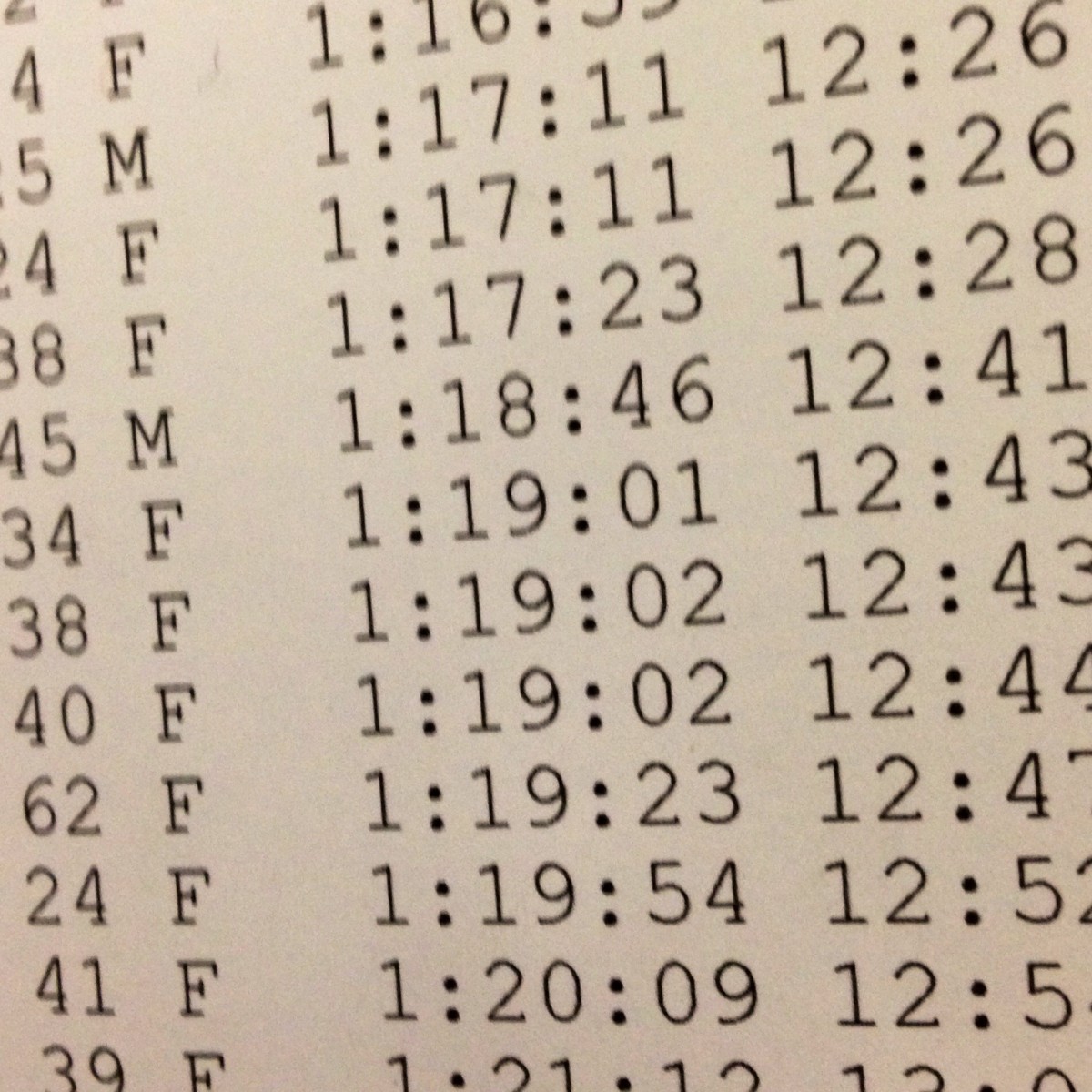 I had no time goals for this race. Coming in at 1:19 made with an average pace per mile of 12:52 made me so happy. I was even happier when I ran a hilly course at a faster pace two days later! 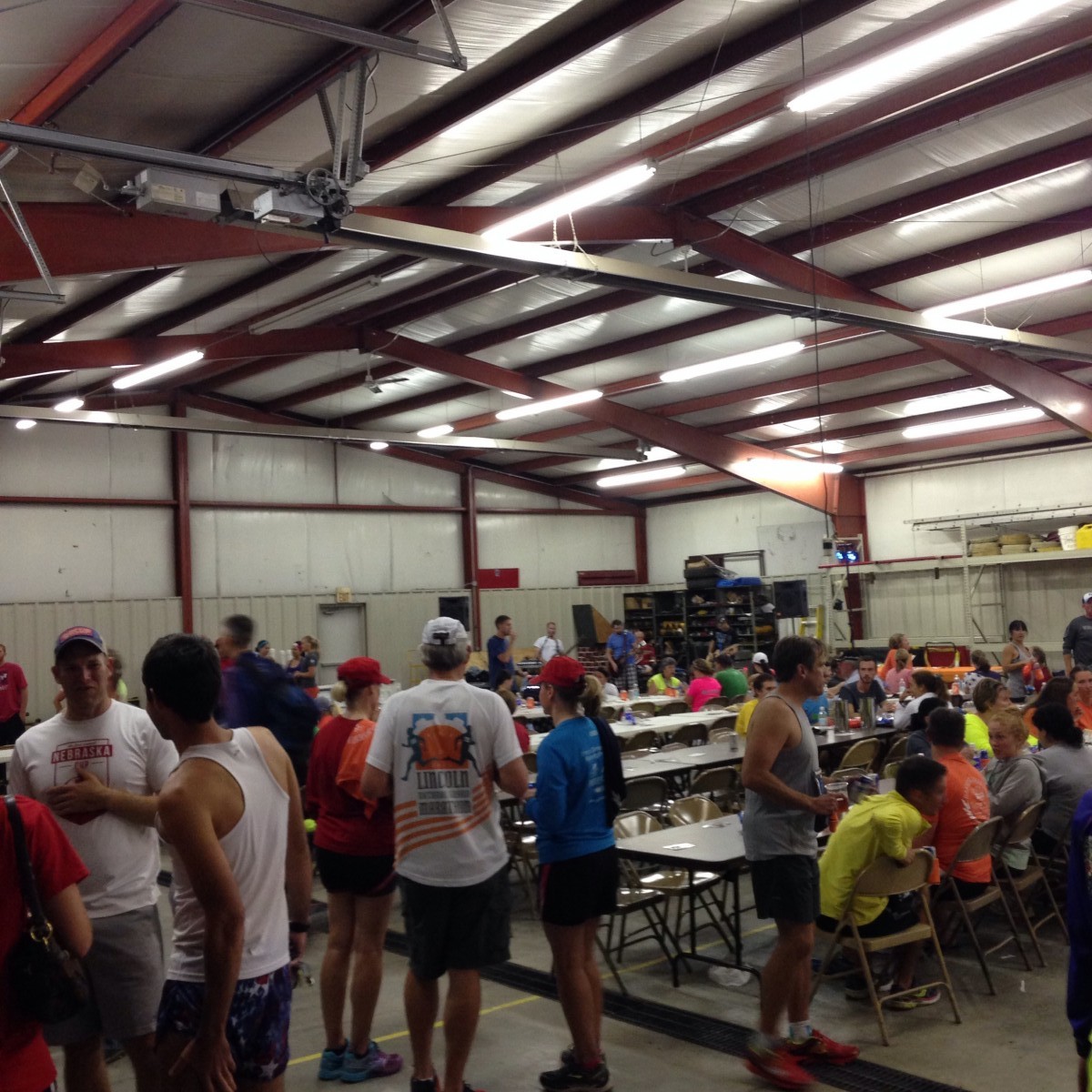 After the race everyone headed over to the local firehouse for awards, a DJ, and post-race food. 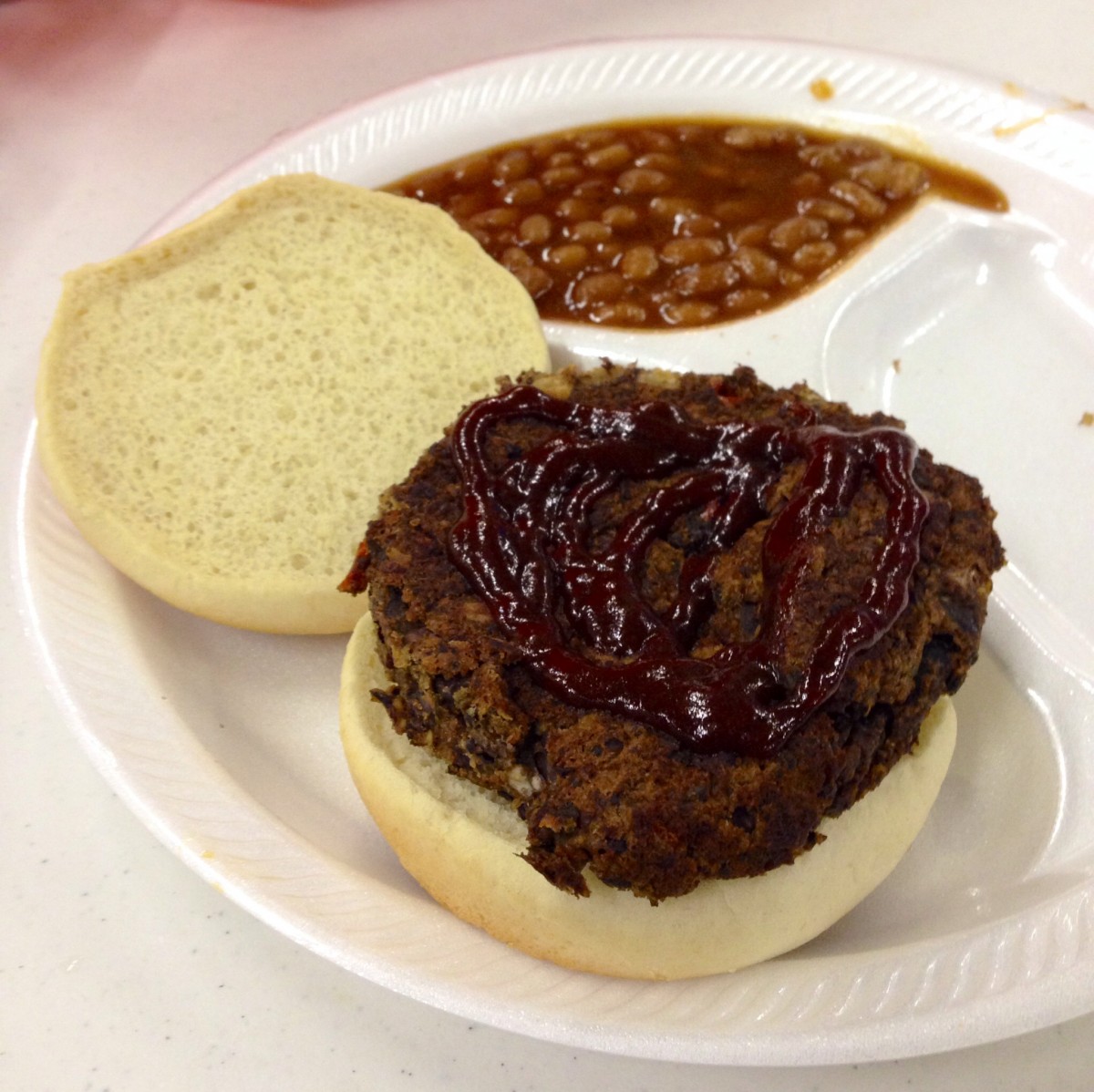 Our race registration included BBQ and beers after the race. I wasn’t sure there would be veggie options and resigned myself to a bag of SunChips when I saw pulled pork being offered. As I made to pass the pulled pork station the lady stopped me and asked me if I wanted a veggie burger instead. A house-made veggie burger with BBQ sauce and vegetarian baked beans? Sign me up! Josh and I agreed that this was the best post-race food ever! 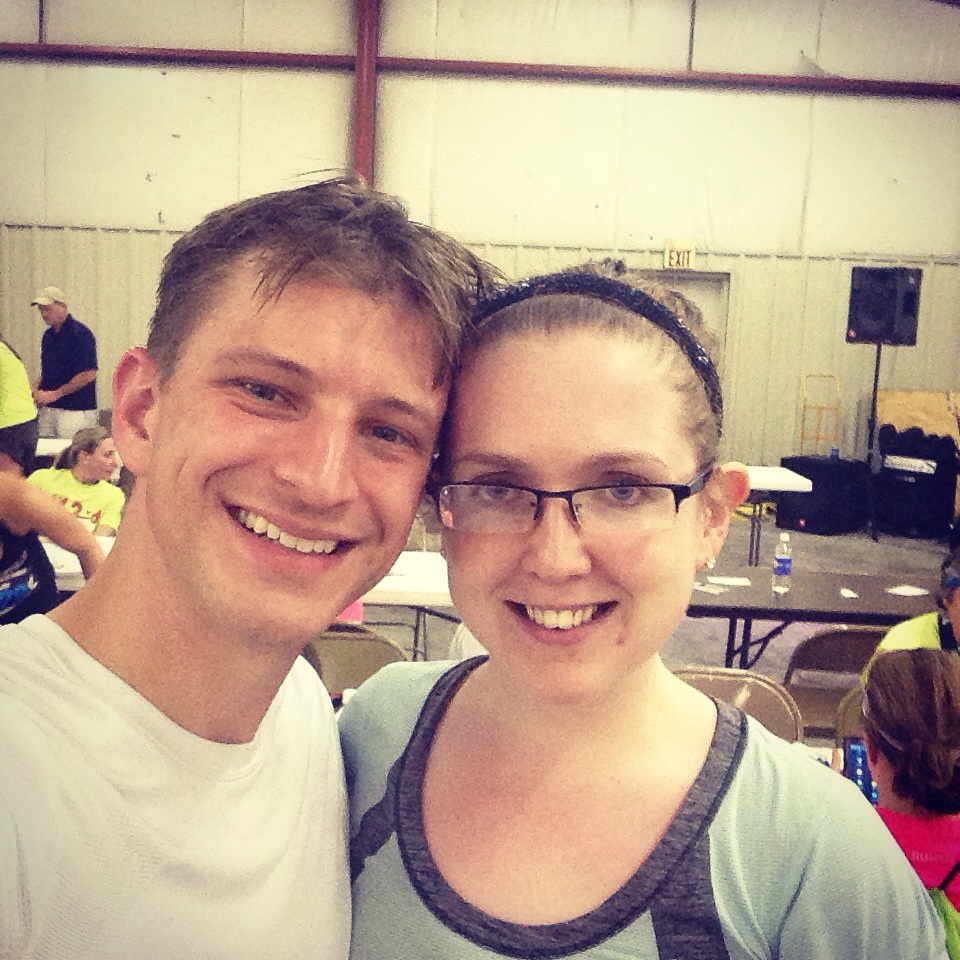 Josh and I both had the most amazing race experience. (He rocked it out finishing in 62 minutes!) We had a fun date night and I realized than I can run longer distances that I thought. I also want to give a big shout-out to Jess because I know the reason I was able to just up and run 6.2 miles was because of the strength training (and all.the.squats.) she was having me do. It takes muscle to power your legs through a run!

If you have been wanting to pull the trigger on a 10k I highly encourage you to do it! Fall is the best time for a race and you’ll be amazed at what your body can do once you put your mind to it. Josh and I are taking this race and the Zoo Run as a sign that we should be signing up for more 10ks in the future. It’s crazy thinking back and seeing how far I’ve come since my first 5k.

Questions of the Day: What was a fitness goal that you thought you couldn’t do until you surprised yourself and did it? Are you a runner? What has been the best race you’ve done to date?