Hey guys. Thanks so much for being honest and opening up in yesterday’s women’s health post. It really means a lot to me. Today I want to talk about something else I did when I was in NYC last week. I went to my first SoulCycle class! 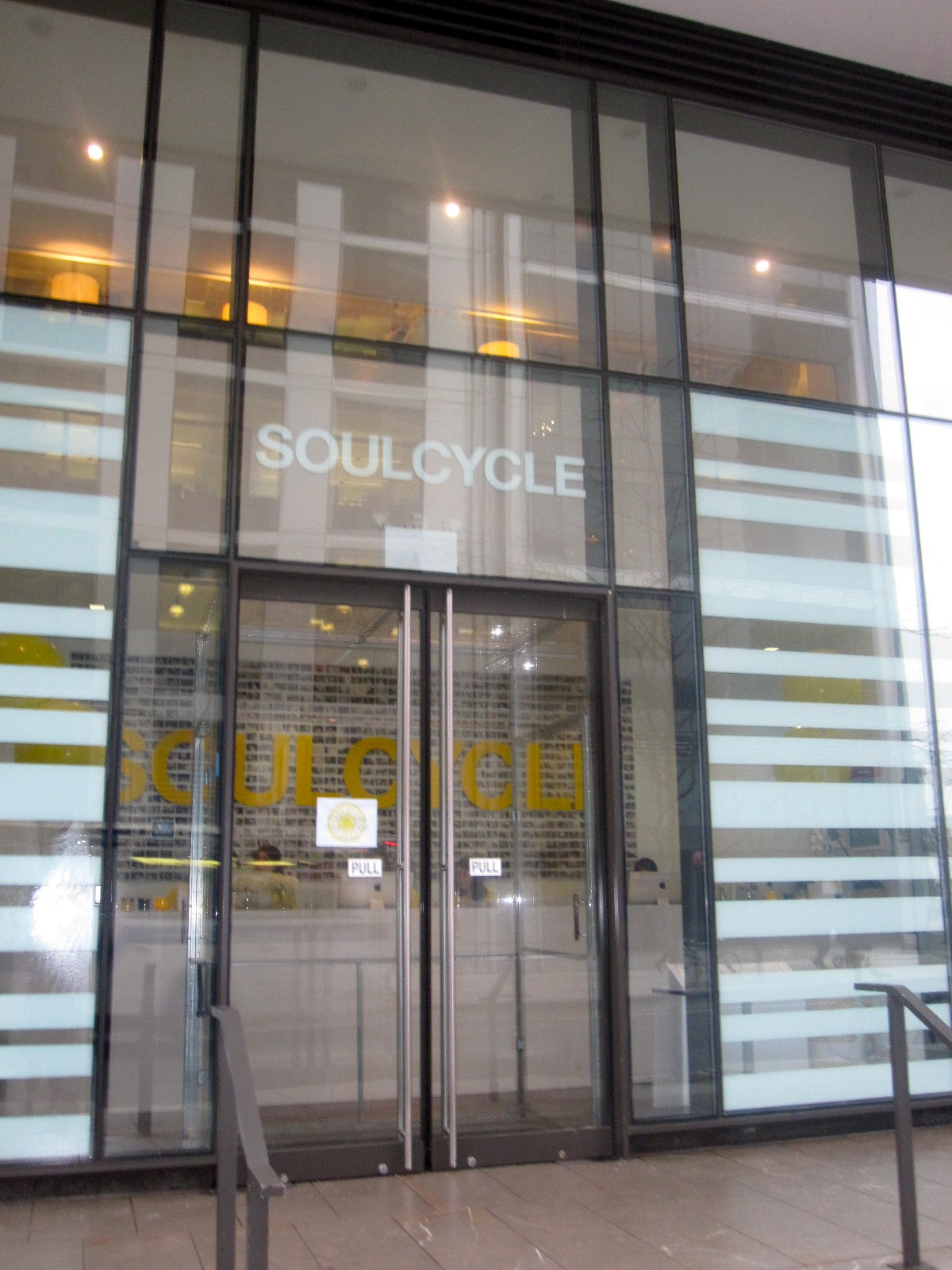 Alec mentioned when we got together a while ago that she works for SoulCycle and loves it. I never really thought much of it, I knew a lot of people rave about spinning but I really didn’t get the big deal. To me it was just another machine in the gym, and I was already content with the treadmill. When I found out I would be in NYC and we were making plans to meet up she asked if I would want to go to a class with her. Curious I Googled around and found this Live! with Regis & Kelly segment about it and began to realize this may not be just any old spin class. I excitedly told her I would love to go. 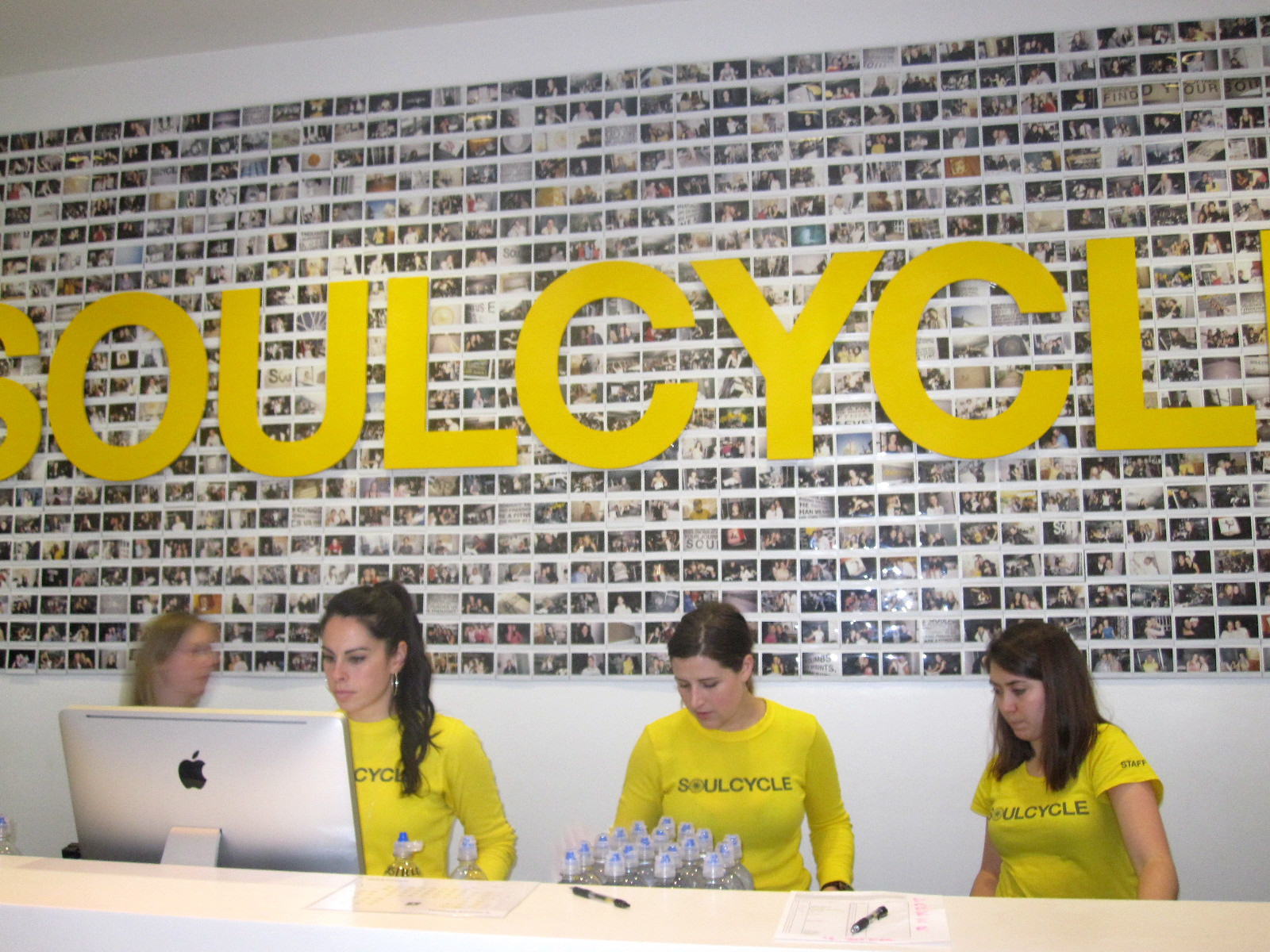 We caught an early evening class at their headquarters in Tribeca. Walking in I loved how bright and clean the lobby was. The staff were all super nice and welcoming. We checked in before picking up water and a pair of shoes. Since you are doing full body movements while cycling they use a shoe that clicks into the bike to provide stability and ensure safety during the class. After getting our gear Alec picked bikes for us. Since I’m new we decided on bikes in the last row. The seats are elevated so we could still see the instructor. 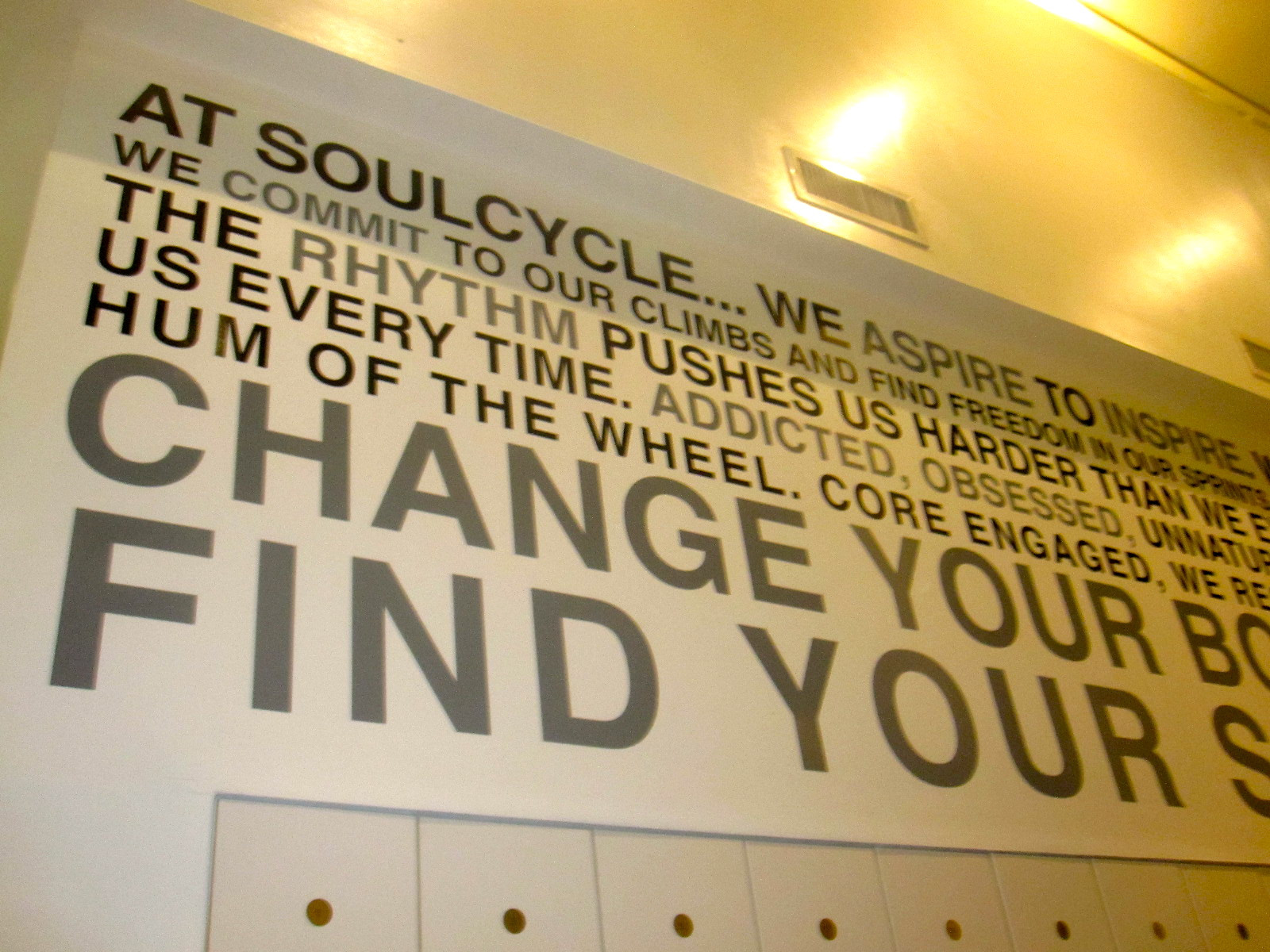 Walking around I loved the mantras on the wall. I loved how positive everyone seemed to be. I also started to get a little nervous. Because of my stomach stuff I haven’t worked out like I’ve wanted to work out in nearly two months! I knew the workout was going to be intense and I was just hoping my body could handle it and I wouldn’t embarrass myself too badly. 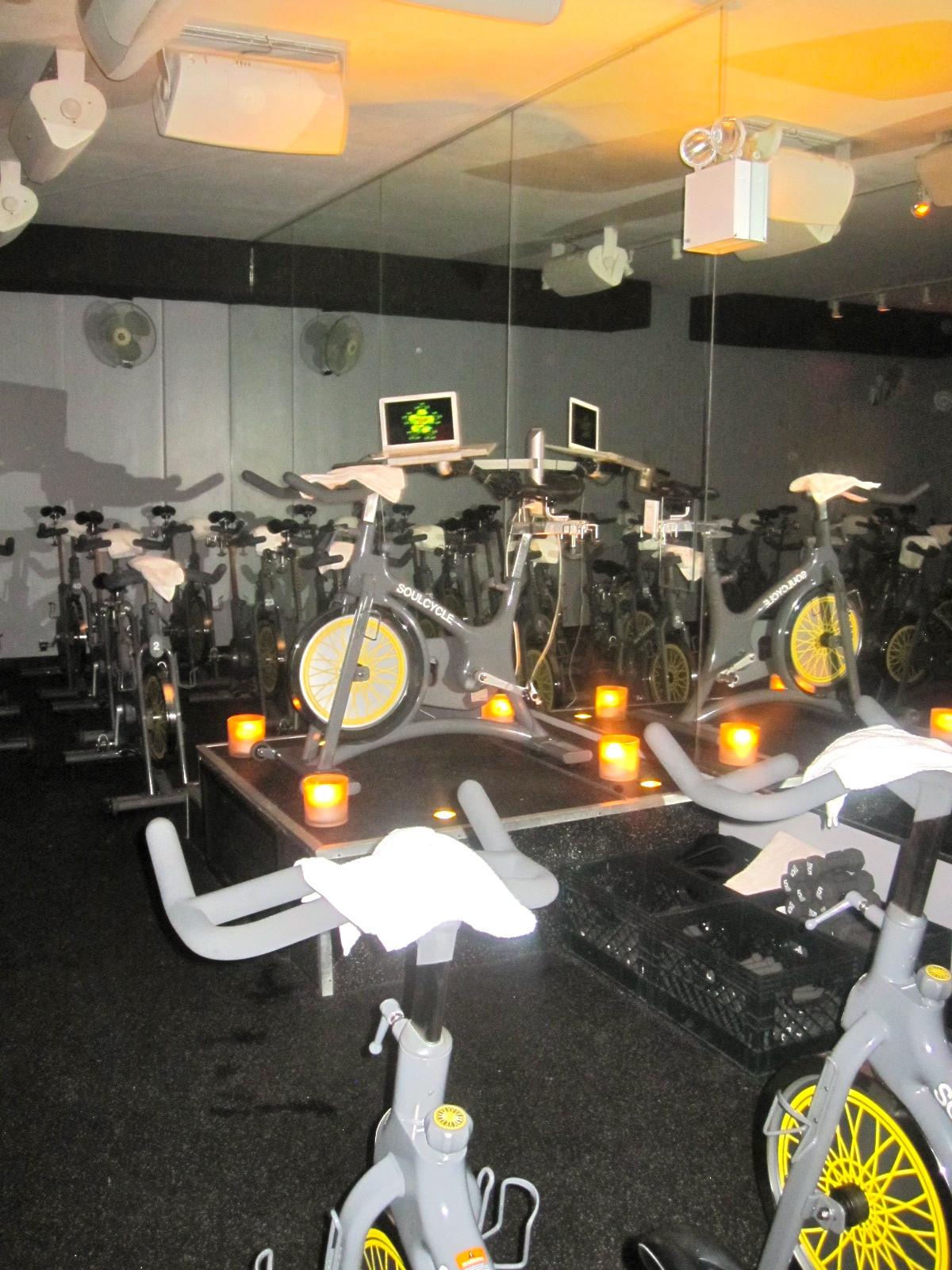 The staff were super nice to let me take pictures of the inside of the studio so I could share my experience with you guys. During the class all the lights are off and there’s candles and it creates an incredible atmosphere. This bike is where the instructor teaches. Our instructor’s name was Parker and he was awesome. Part of the SoulCycle experience is rocking out to an amazing soundtrack and he did not disappoint. There was never a dull moment or bad song in the class.

Alec and I sat in the middle of the back row. At first I couldn’t get my shoes to click into the machine and I started to get a little overwhelmed. Thankfully between Alec and one of the girls who works there we were able to get me all situated on the bike. We started off with a warmup song and I tried to get into the rhythm of biking. There’s a lot of back and forth, up and down, and side to side movements. Alec warned me it would take a while to adjust to it. While I would fall out of it every once and a while I feel like I pretty quickly found my groove. We did resistance work, speed work, ab work, and arm work with light handheld weights. Parker was great at knowing when to encourage water breaks and when to pump it up and push people further. My one gripe was that his mic was either too close to his face or glitching a little bit because it was sometimes hard to hear what he was saying. Thankfully I could just turn to Alec and she would tell me which way to turn the resistance nob or what we were getting ready to do. She mentioned it in the cab after class too so I don’t think that normally happens.

So could I handle the class and make it through a workout? I’m so happy to say I did! Parts of the class were really hard (My arms were on fire during the weights segment!) but it felt so rewarding. I always feel good after a workout but I did not expect how euphoric this class would make me feel while I was still working out. At one point the instructor turned the resistance up and slowed everyone down and told us to just close our eyes and find our strength and push through it. This is going to sound really cheesy but I had the biggest smile on my face throughout that section as I worked on just keeping my feet peddling. I felt so strong and capable. The class flew  by in the blink of an eye. I was tired and sweaty but I didn’t want it to be over. The instructor knew it was my first time and congratulated me on a great class as Alec and I were getting up from our bikes. During the middle of the class he had turned on the lights in the back row of the studio for a little while and I wasn’t sure why. After congratulating me on finishing my first class he said he turned on the lights in the back so everyone could see how we were nailing the routine. He may just have said that to make us feel good, but it worked. I left feeling like a rock star.

My legs had not started to feel sore yet, Irish Dancing gave me crazy calf muscles, but that was soon remedied the next day. Oh man were stairs difficult the next day, and the day after, and the day after that. My thighs were on fire. I can’t even imagine how good my legs would look if I lived near a studio to be able to take these classes on a regular basis! 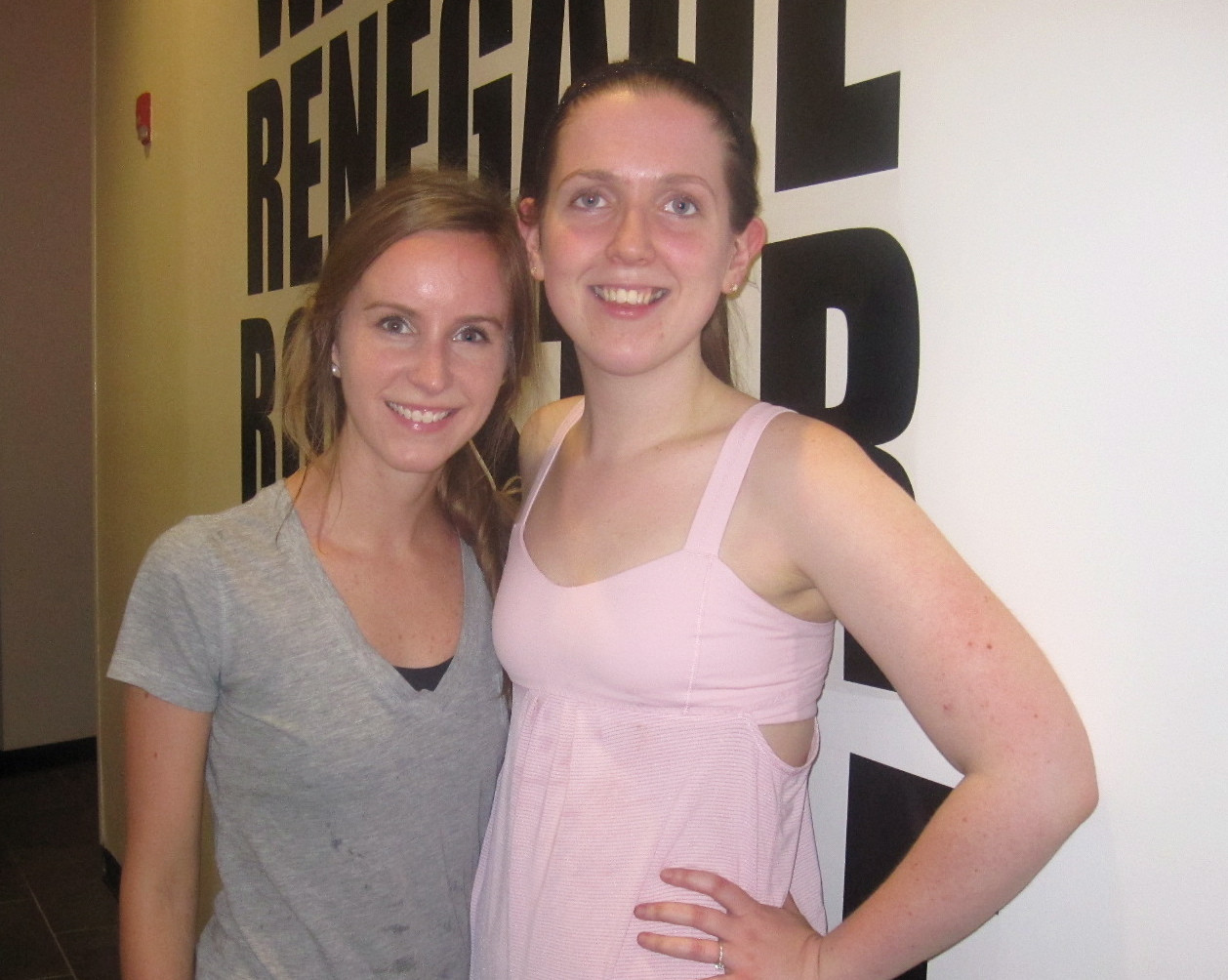 Alec and I after class. I look like a sweaty mess but oh man was I a happy sweaty mess. ;p As we were getting ready to leave (Alec had a hot date,  I had a girl date with my friend Morgan from college.) they were setting up for a party. Apparently it is SoulCycle’s anniversary! They had a DJ, food, and giveaways on some of their merchandise. They buy from Lululemon and Nike and personalize the gear. It was all so gorgeous, I wish we had been able fit the party into our schedule.

I loved getting to work out and spend time with Alec. If you’re ever near a SoulCycle and want to rock a workout I totally recommend taking a class and a buddy. And if you’re a morning person you might just get to workout with Bradley Cooper! Alec was joking with me later that not only did we miss the party that day, we missed seeing Bradley rip off his shirt in a class! Women were falling off their bikes!

I feel like this class may have spoiled other cycling classes for me. This didn’t feel like a workout, it felt really hard, but it felt so fun. There’s currently no classes in Central PA so I’m hoping to do more classes when I’m back in NYC and CT. I’d also like to check out cycling classes in my area and see how they compare.

I want to send a big thank you to Alec for taking me to this class and introducing me to something so amazing. I also want to thank SoulCycle for being so friendly and helping make my first class such an awesome experience!

Question of the Day: Are you a cycling fan? Have you been to a SoulCycle class? What did you think of it?