Hey guys! Happy Monday! I hope you all enjoyed the Superbowl yesterday. I enjoyed the food, Beyonce’s half time show, the commercials, the power outage, and the randomly tense/awesome second half. You’re probably going to be hearing enough about the game today though, so I’m writing about something completely different. I mentioned last week that I was in NYC working with Glam Media (my blog’s ad network) and Kotex on a project. Today I get to share with you guys the behind-the-scenes of what that project is all about. 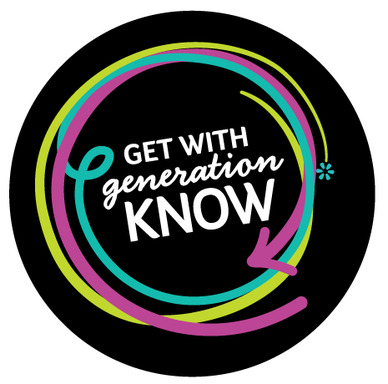 Kotex recently launched the Generation Know campaign. The campaign was created because despite being the 21st century and women being awesome and us having access to education and freedoms women just a few decades ago couldn’t imagine, there is still a serious lack of open discussion and honesty about our bodies. There are so many myths out there. I know I’m not the only girl who had to Google if virgins can use tampons when I got my period ten years ago. Here are some other commonly asked questions Kotex is seeking to educate women on:

With so many women not talking about these things with one another, where are young girls supposed to go to get their information? And how dangerous is it for girls to get the wrong information about this stuff? Generation Know is all about getting women to open up and talk with one another, and to not be embarrassed or shy about our own bodies! They’re the only bodies we’ll ever have, so we should be proud of them! 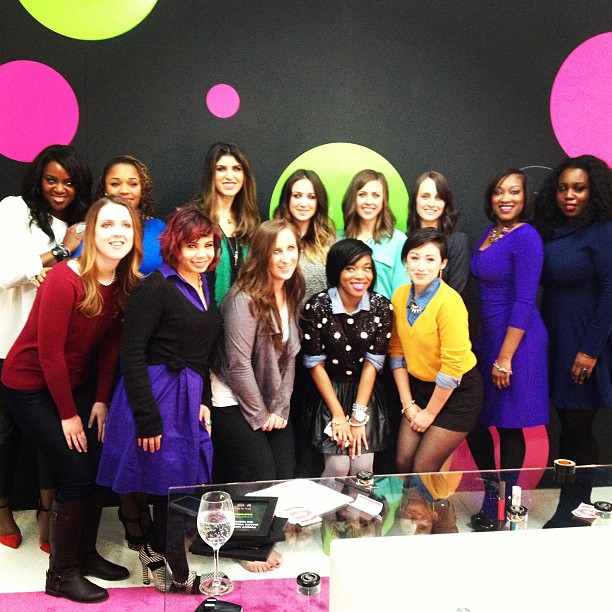 And talk is exactly what we did. I was one of twelve bloggers and two moderators who got to spend the day getting real about being a women and opening up about our bodies and our insecurities. It was so great getting to meet all the other bloggers. Everyone was so warm and welcoming and honest. Most of the women were style bloggers, so it really neat to get to see a different side of the blogging world. It was also really awesome to see how even though we have such different focuses on our blogs, we still have such similar experiences when it comes to our blogging excitement and struggles. The ladies included:

Channing from Channing in the City

Clare from Fitting It All In

Danielle from The Style and Beauty Doctor

Janique from Her Goody Bag

Liz from So Much to Smile About

Melanie from O So Chic 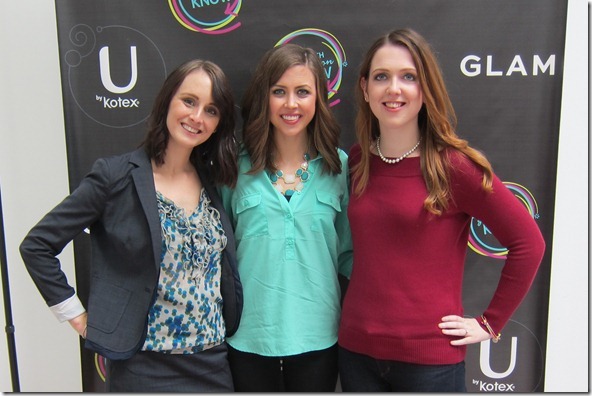 Caitlin, Clare, and I represented the healthy living bloggers. It was so great getting to meet them. They are just as amazing in person as they seem online. Caitlin is the creator of Operation Beautiful, a campaign that teaches self-acceptance and love and has touched so many young women’s lives. I loved getting to chat with her and see pictures of her beautiful little baby boy. Clare is a fellow FitFluential Ambassador and young blogger, so it was awesome to get to chat about boyfriends and career paths and all those things early-to-mid 20-somethings are dealing with. We shared a cab ride to the airport the morning after the event and had to laugh as the cab driver expected a married couple and had a sign for Mr. and Mrs. Brady (Clare’s last name) in the window. ;p Hopefully we all get to meet up again soon! 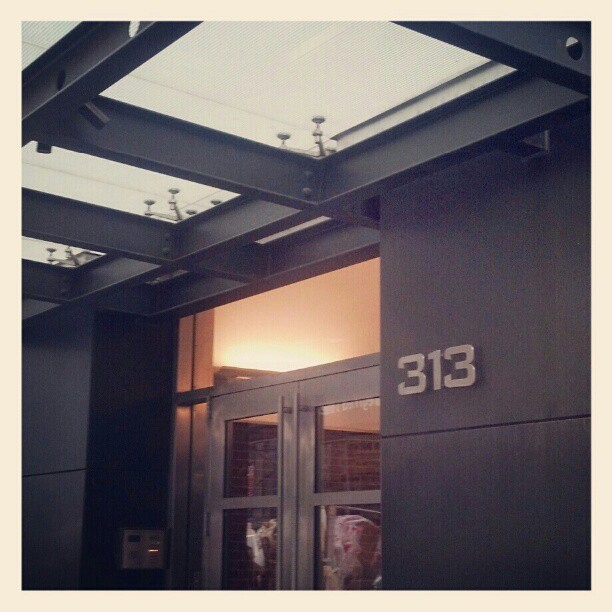 Okay, so to back up and give you a recap of the day. Our morning started with us all meeting at a NYC studio at 9am. I was so excited I got there a little early and got see some of the set-up for the event. 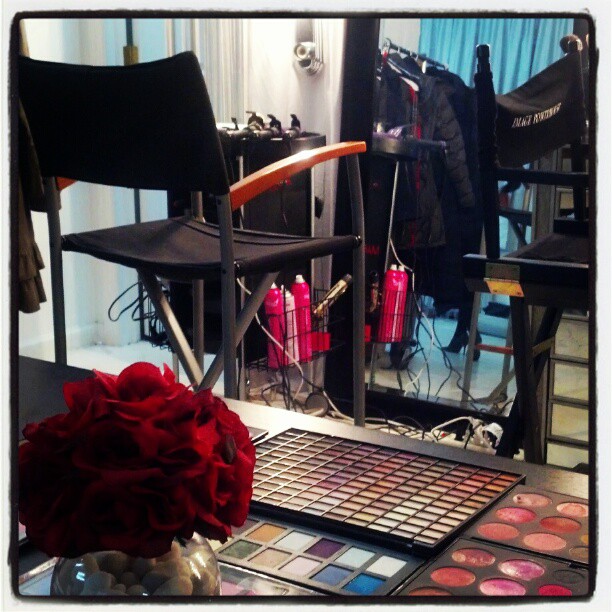 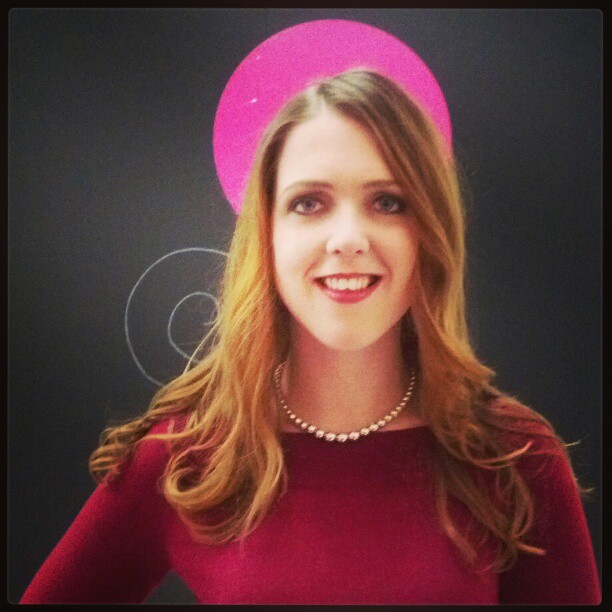 I felt so VIP, thanks so much The House of Makeup! 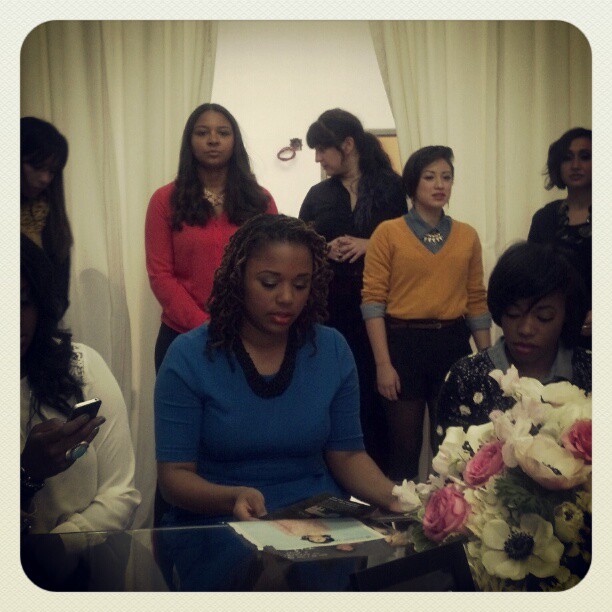 After getting beautified and taking pictures, it was time to get down to business. Led by the moderators, we opened up about our bodies and shared our period stories. I talked about getting my period at 12 and how scared and uninformed I was, being raised by just my dad. We talked about how taboo it is to even talk about that area of our bodies and our reproductive health. We said the word vagina. A lot. I used to cringe at saying that word or would try and talk around it without ever having to say it. After that day I have no fear or shame about it. We talked about how our opinion of our period has changed over the years. I talked about how what I once cursed every month I now celebrate. After hearing from so many friends and reading about so many bloggers who can’t get their periods or who have so many struggles with it, I am so grateful for mine. It comes every four months like it should (I’m on the birth control Seasonique, so I only get four periods a year), has always been regulated, and has never even given me cramps. I feel like as young girls we’re taught that our periods are such an inconvenience and a hassle when really they are such a blessing. As women we are supposed to get periods. It means our bodies are healthy and functioning as they should. It means someday I get to contribute to the circle of life and have a baby. That is such a powerful thing, and something to be proud about.

Every women there had such an incredible story to share. Some stories were hysterical, some were happy, some were embarrassing, and some were sad. Most importantly, they were all real. It felt so good to talk about things women usually don’t discuss with each other. 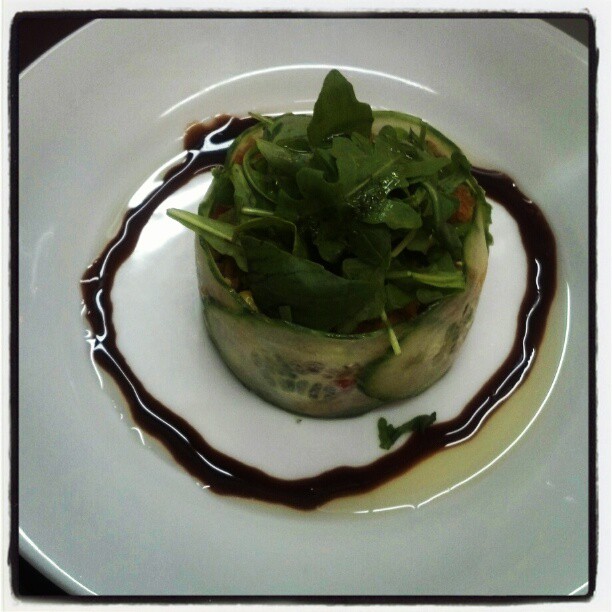 After our roundtable discussion it was time for some food. You know I took pictures of that for you guys! We started off with a cucumber salad and not only was it pretty, it was delicious! I need to learn how to make pretty presentations like this. 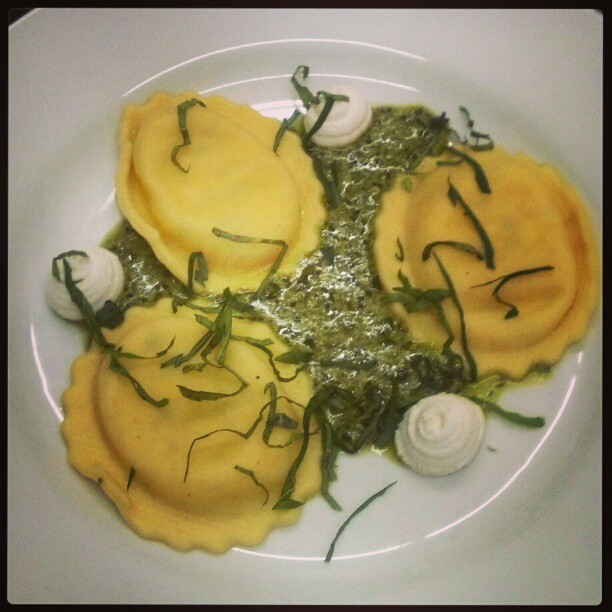 The catering staff was amazing. They had a meat, vegetarian, and vegan food option. I absolutely loved these goat cheese raviolis with pesto sauce. 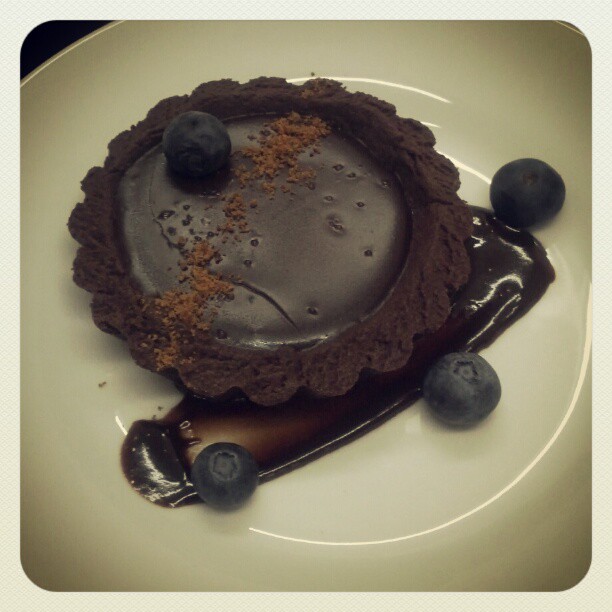 For dessert there was a chocolate tart with caramel filling. It was so decadent and yummy. 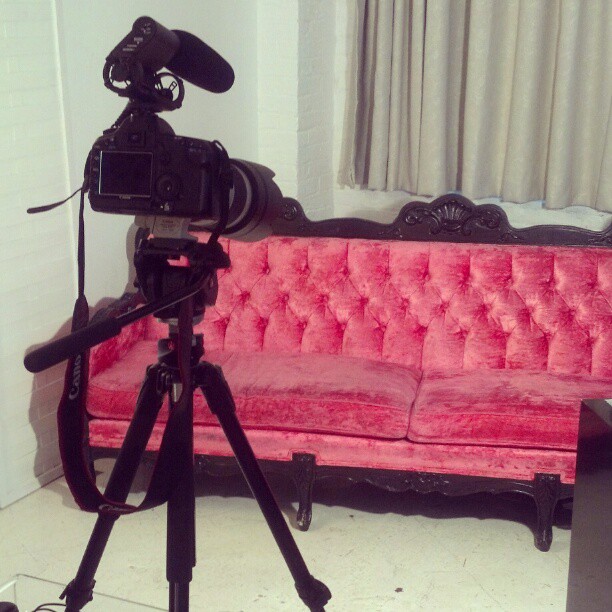 After lunch it was time to get talking about vaginas again. We were broken up into small groups for interviews. Each group was given a topic to discuss relating to what we had talked about as a big group. 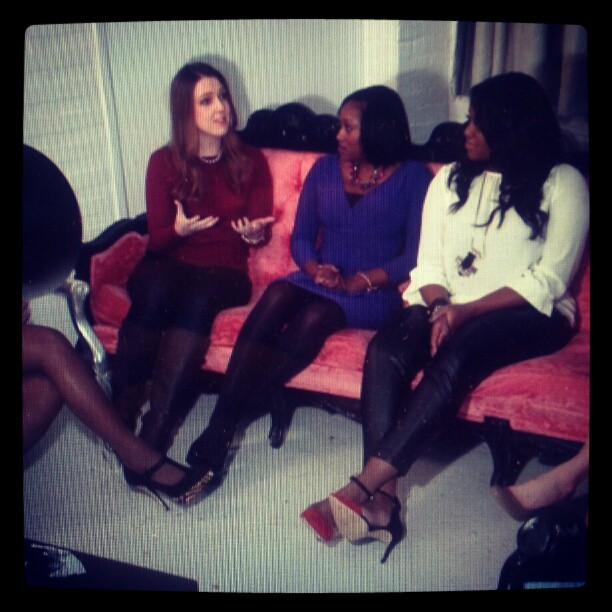 My group’s topic was separating fact from fiction when it comes to women’s health. We started off the discussion by being asked if we thought the myths surrounding women and their periods affected their self esteem. At first I didn’t think anything of it but as the conversation went on and we started discussing all the myths that are out there, I had a major ah-ha moment. All the myths out there about women’s periods are bad. You’re dirty. You can’t cook spaghetti sauce or it will go sour. A bear will attack you. You’ll smell. You can’t go swimming. You’ll break a mirror if you look directly into it. You can’t have sex. You’ll turn into a hormone raging monster.

None of these myths say you’ll turn into a goddess and be powerful and sexy and good things will happen.

That means that since their preteen years, women are surrounded by these negative and damaging and hurtful myths that are about the very thing that makes us women. It’s hard to feel confident and proud about something that has such negative connotations. And when these beliefs are about who we are at our core, they doesn’t just affect what we think about one aspect of ourselves, they affect how we think of ourselves as a whole. At first it’s easy to think these myths don’t have any effect on our self esteem. It’s easy to say they’re just myths. But these myths that have been perpetuated for generations bring down women and make us feel inferior or less than.

I am so proud to be a part of Kotex’s Generation Know campaign because it seeks to erase the myths and educate women (and men!) about what it really means to get a period, and how that really affects all of us. Knowledge is power. The sooner women start to realize how proud they should be of being a woman and their body and all that comes with it, the sooner we can start getting rid of the feelings of fear and insecurity that so many young girls (and women!) struggle with. It’s time for us to speak out. 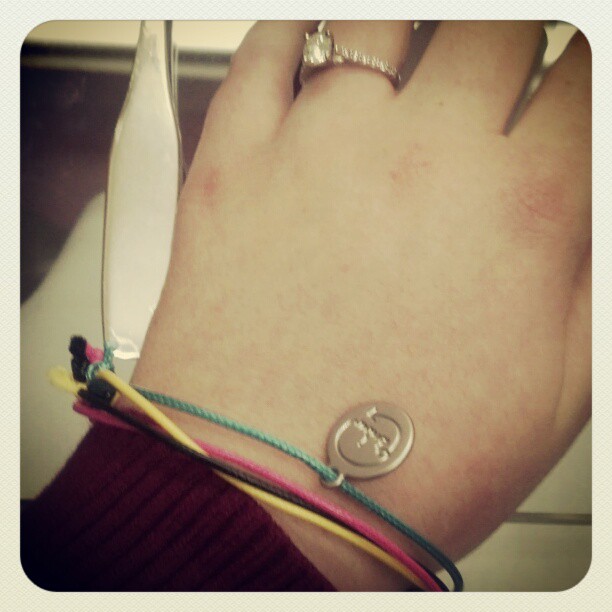 We ended our day by receiving bracelets that say “I know.” If you know the facts and want to share them, join the campaign and get your bracelet over at Generation Know’s website.

And because she rocked it last night at the Superbowl and I think she is an awesome source of girl power I’ll leave you with Miss Beyonce and her Run The World (Girls) song. She sings the truth. 😀

U by Kotex Brand is committed to empowering girls to change the way the world thinks about periods and vaginas through Generation Know, the first generation of girls comfortable asking questions, gaining real knowledge and spreading information about their health and bodies to others. To get the facts, learn how to make a difference and get a free Generation Know bracelet to symbolize your commitment, visit www.GenerationKnow.com. For every girl that joins, U by Kotex brand will donate to Girls For A Change to continue to create change.

Question of the Day: What myths did you believe/do you still wonder about your period? I totally thought a tampon could get lost inside of you when I was younger.

Disclosure: Compensation was provided by U by Kotex® via Glam Media.  The opinions expressed herein are those of the author and are not indicative of the opinions or positions of U by Kotex®.