This weekend was a fun one. Josh and I celebrated our first 4th of July in Omaha and our first wedding anniversary. This year has flown by and I couldn’t have asked for a better weekend to celebrate it all.

Jeff and Joanna invited us to their family’s lake house for 3rd of July celebrations after work on Friday. 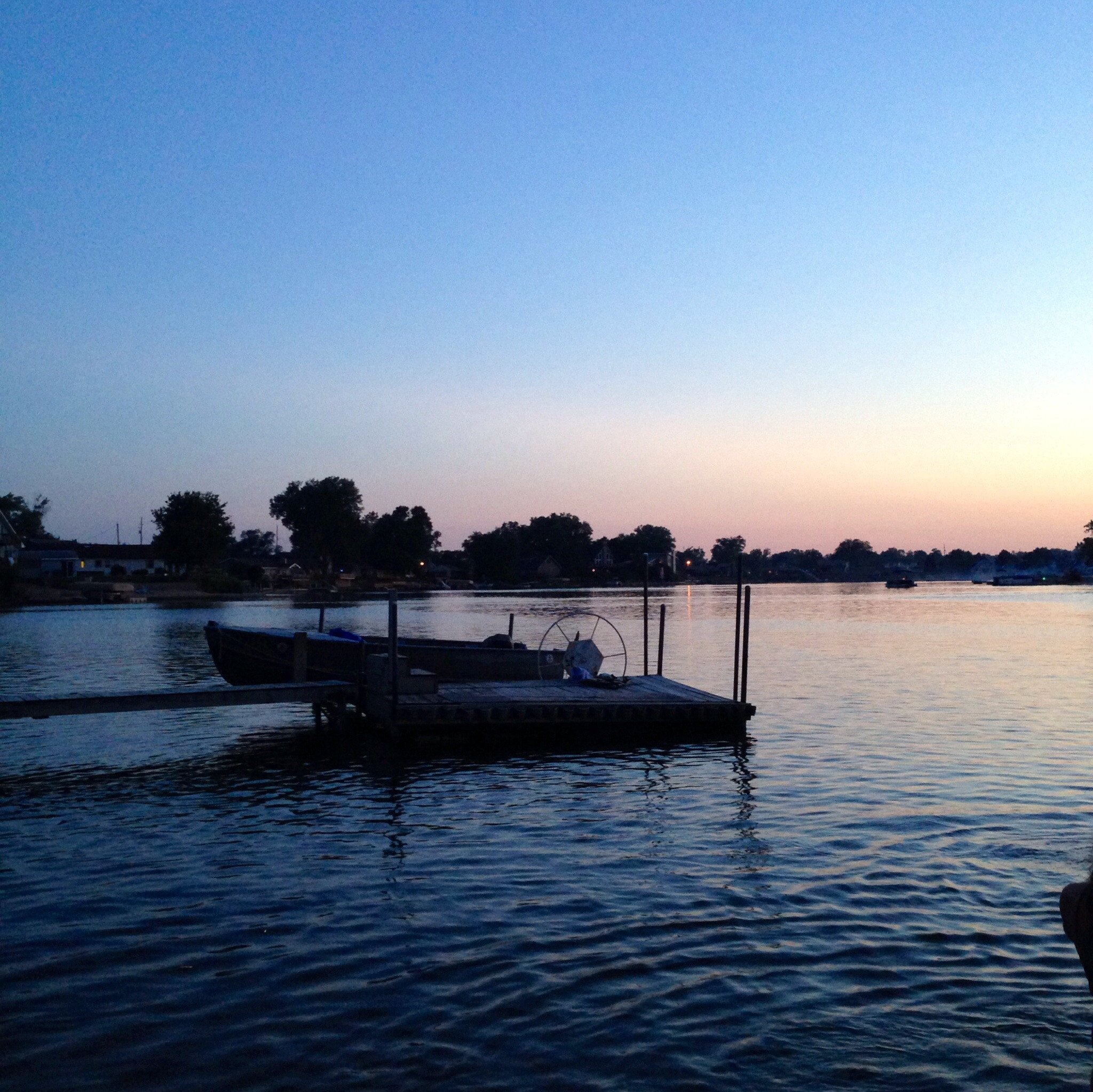 I now really want a lake house. How amazing would it be to wake up to this in the summer? 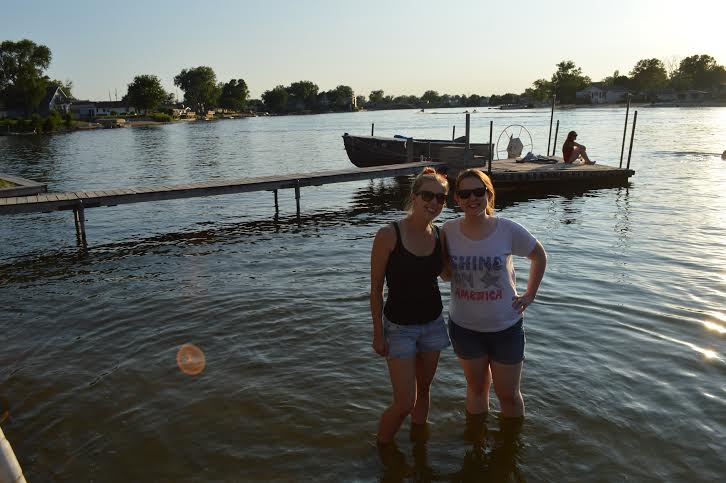 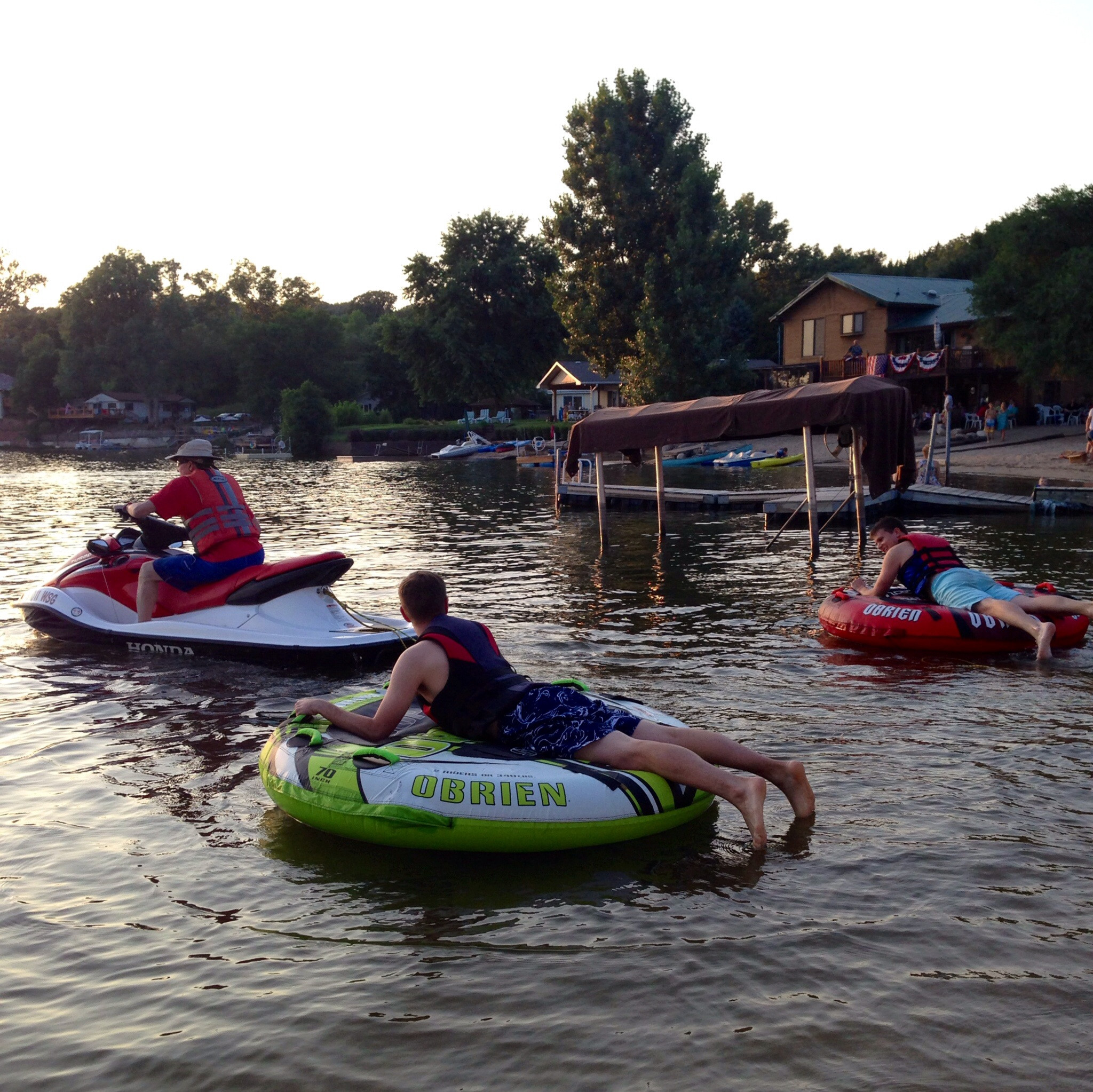 Josh and Jeff tubing. I was too chicken to try. Maybe next time. 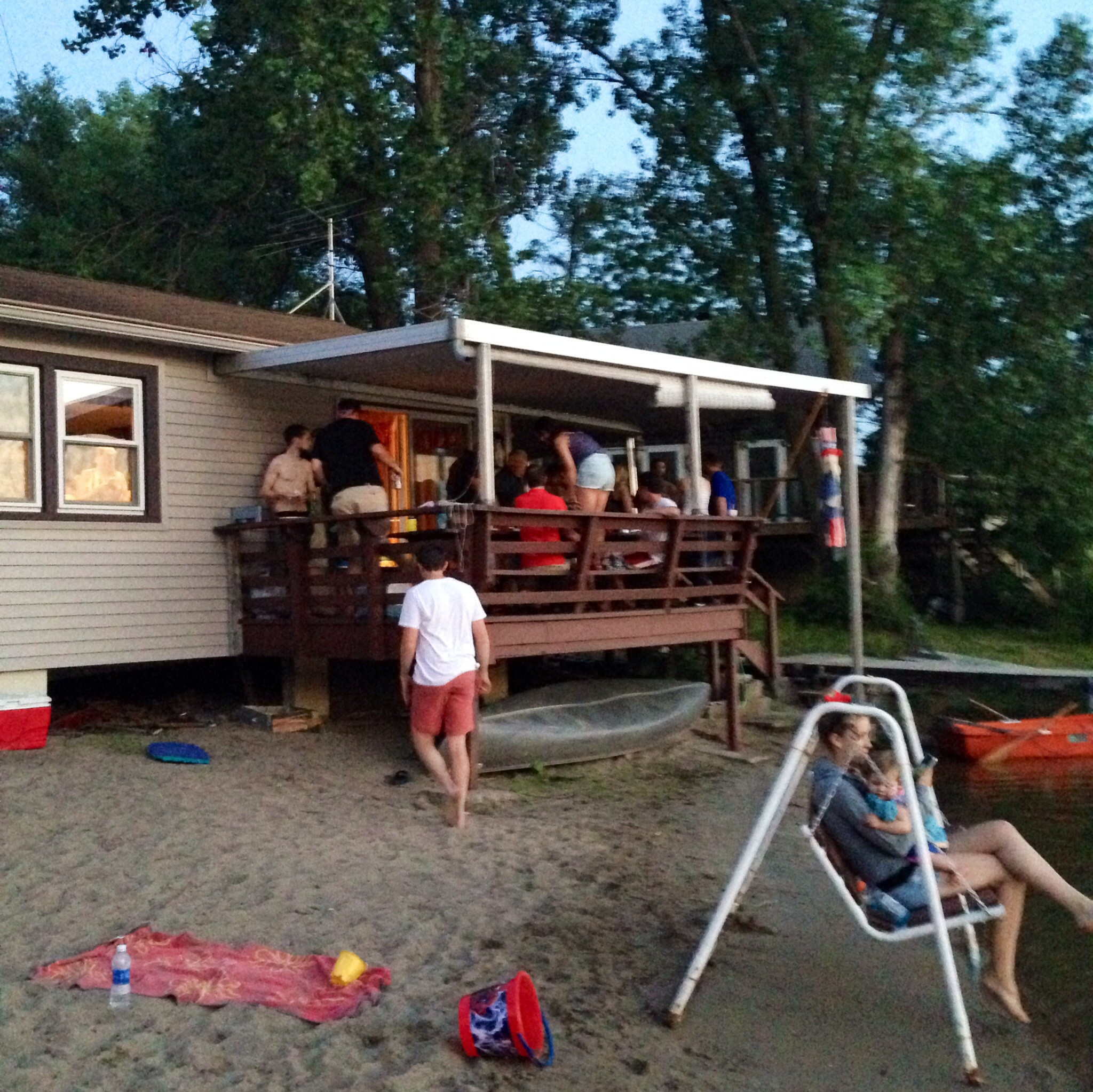 There must have been 50 people there that night. There was so much food, so many cute babies, and such nice people. 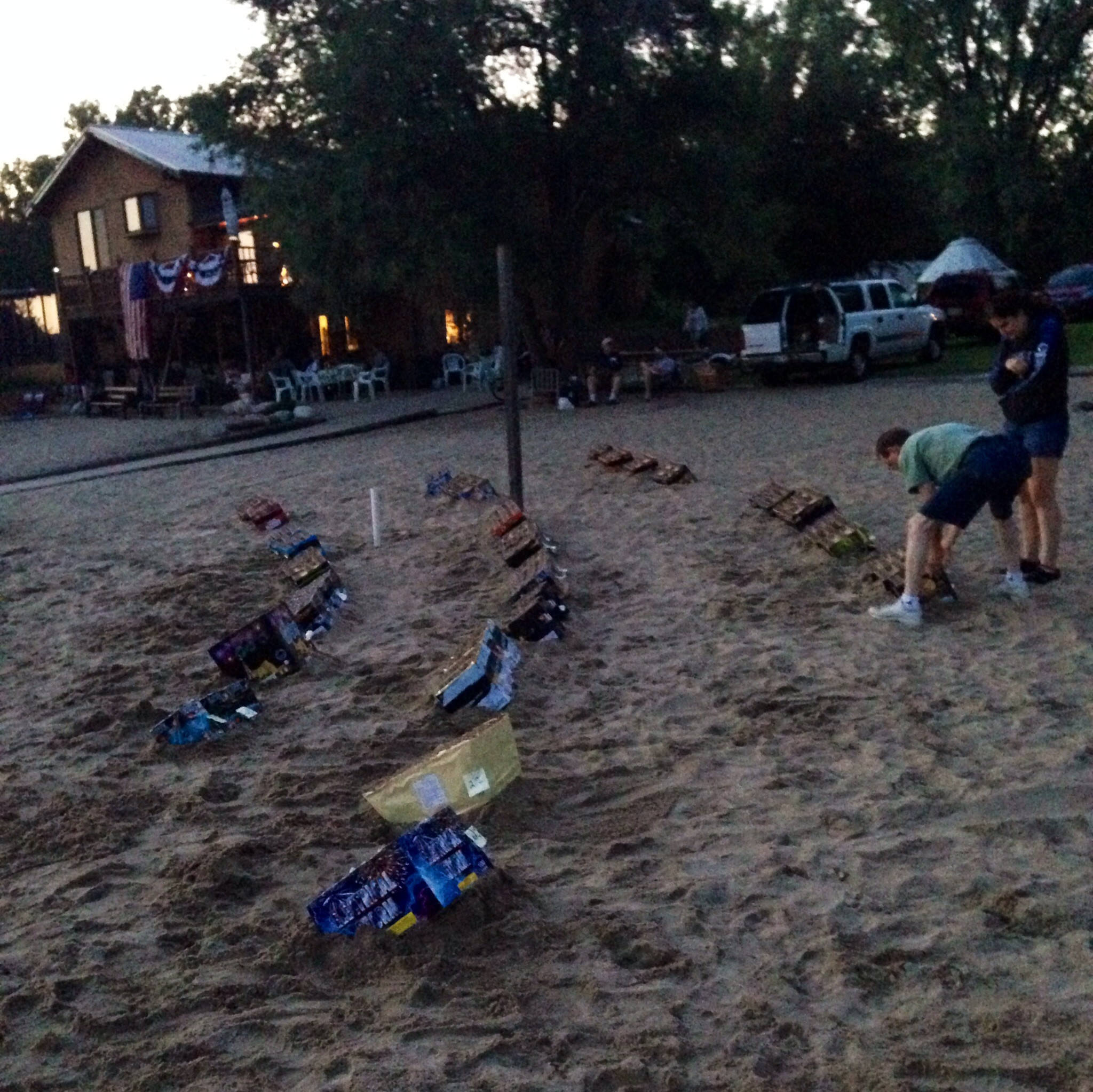 There was also a ton of fireworks! I’ve never been to a personal firework show before. 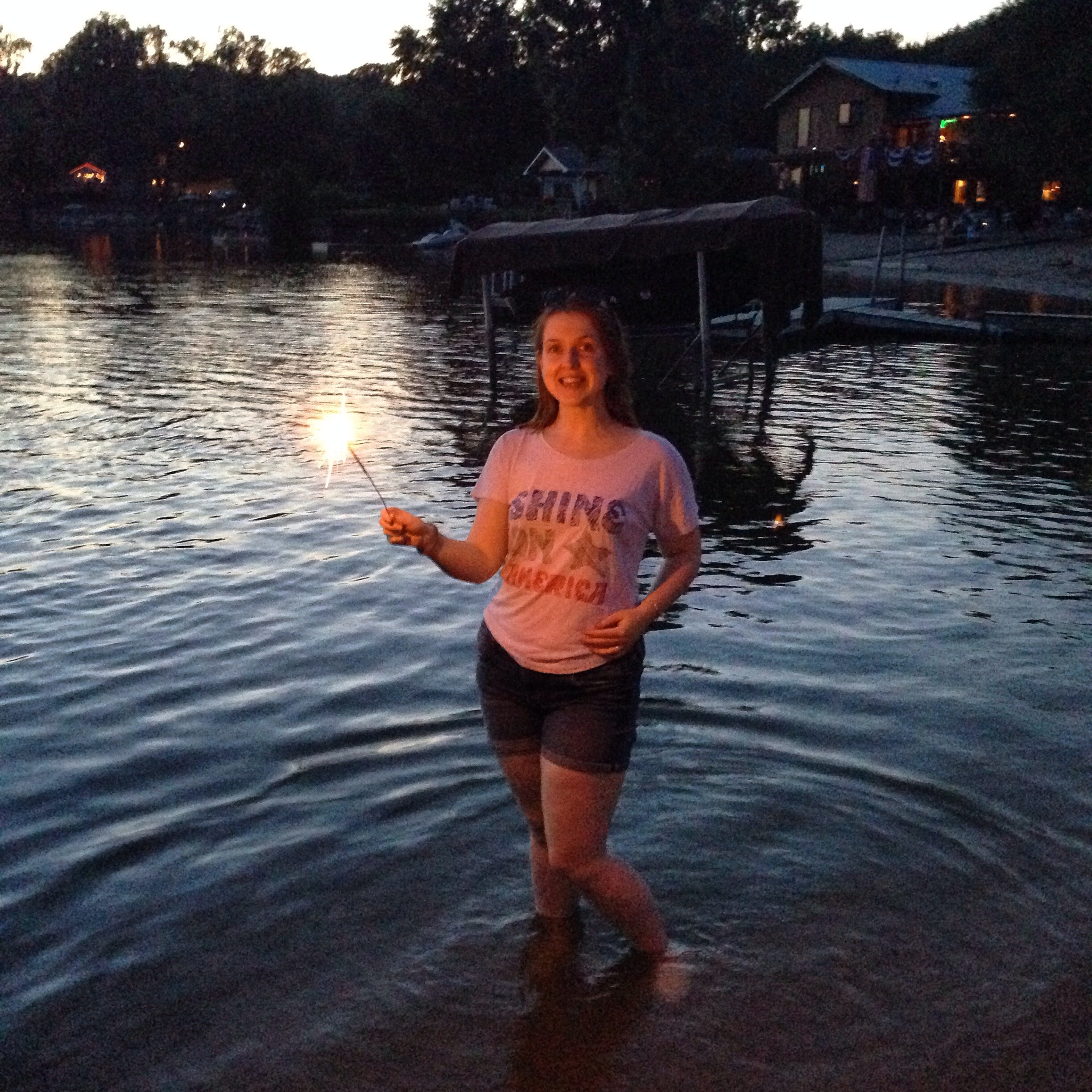 I was so excited to find out there was sparklers! They’re my favorite. 😀 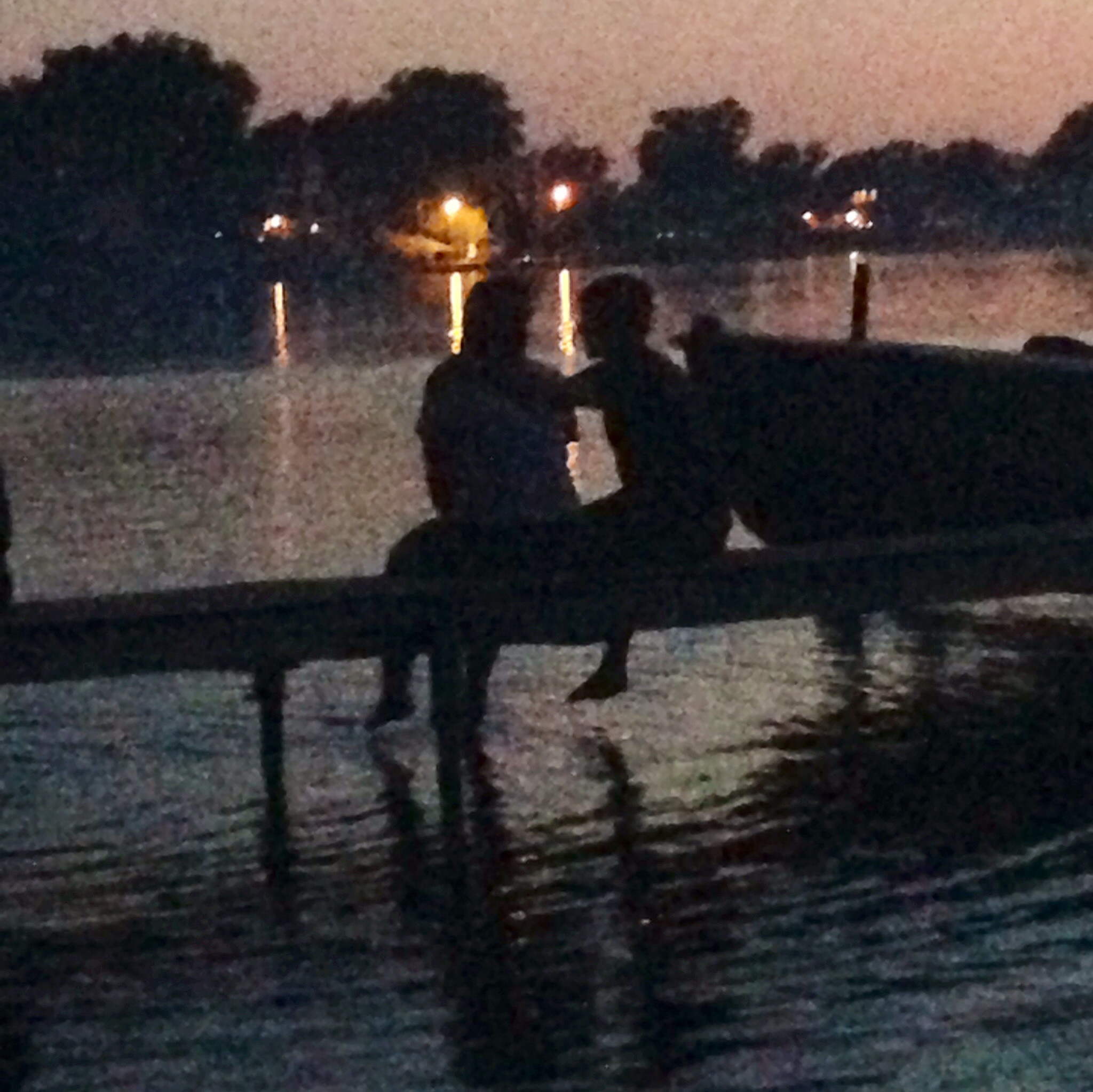 Josh and I sat out on the dock watching the fireworks. 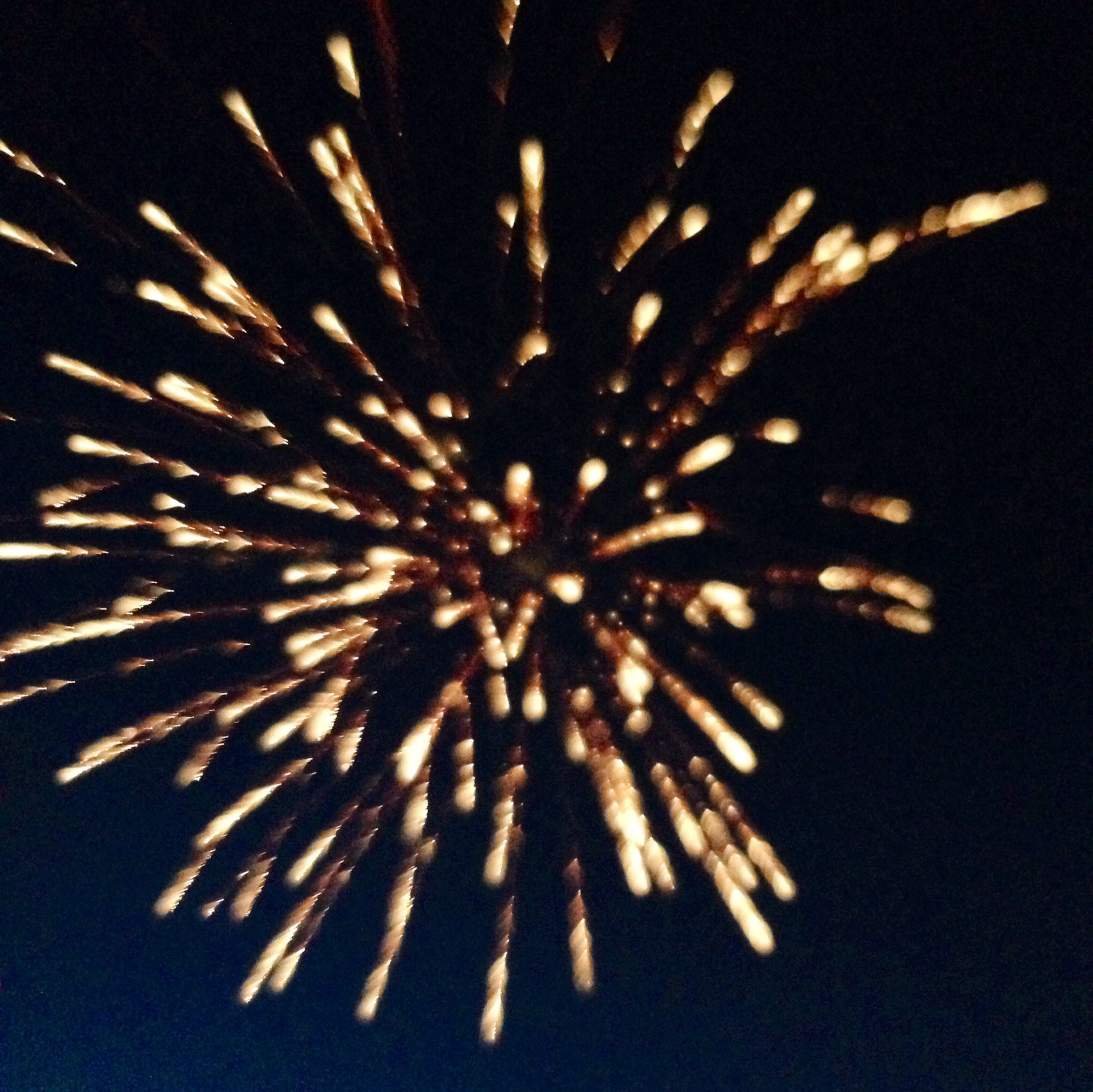 They were incredible. It isn’t 4th of July without fireworks, and these definitely started the weekend off right. 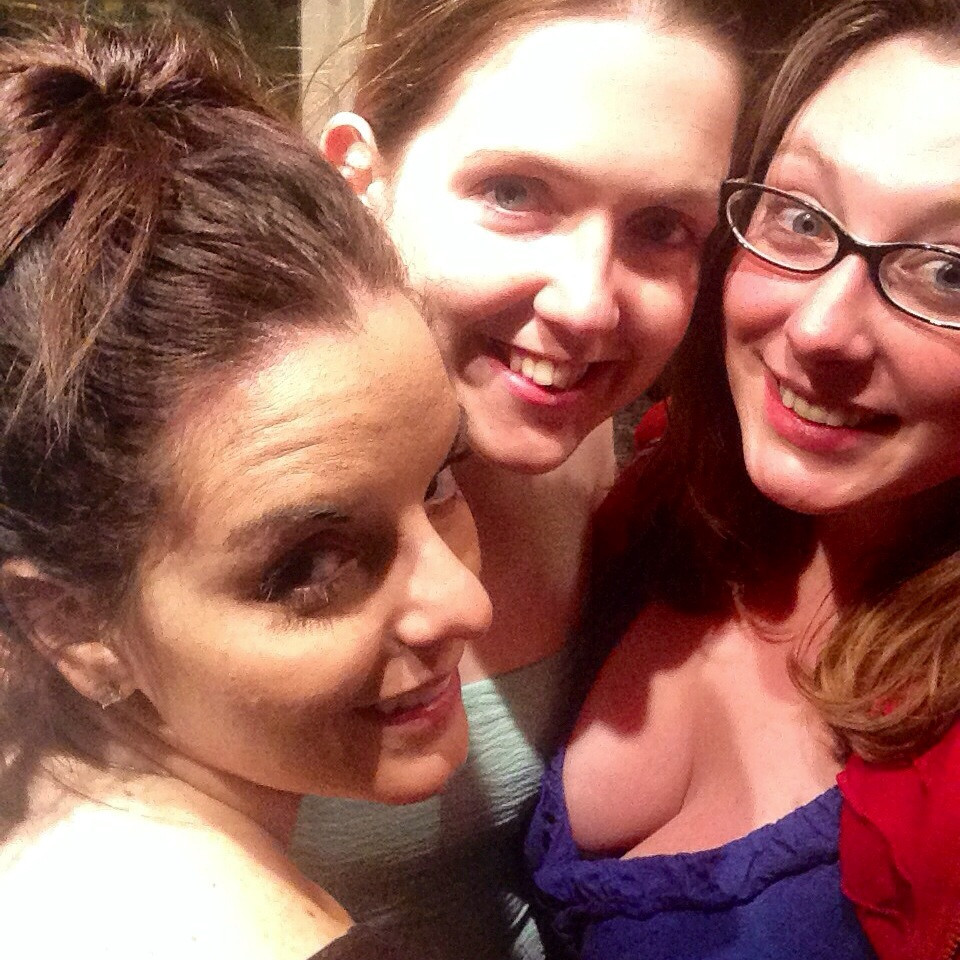 Friday I went to a cookout at Molly’s. We celebrated the 4th of July with a big group of people, lots more food, and fireworks in the park. I’m bummed this was the only photo I managed to get that night, but Josh and I had a blast. 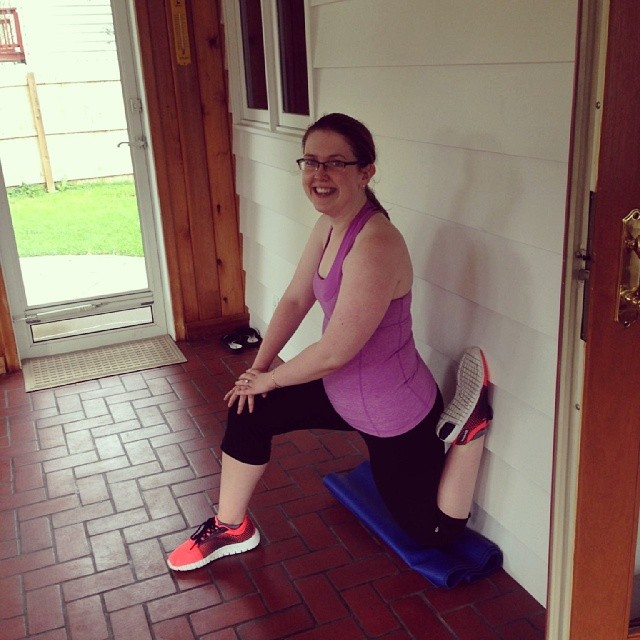 Saturday morning Josh and I woke up bright and early (and slightly hungover) to go workout at Jess‘s. She led us through a HIIT workout that kicked my butt and made me feel strong. She snapped this picture as I cooled down with a stretch at the end. I don’t know what is up with my goober face pictures lately. They’re not flattering, but that’s how I looked in the moment so I’m going with it.

We kept the rest of the day low-key. We grocery shopped, watched a billion episodes of Chuck on Netflix (our new obsession) and napped. It was wonderful. 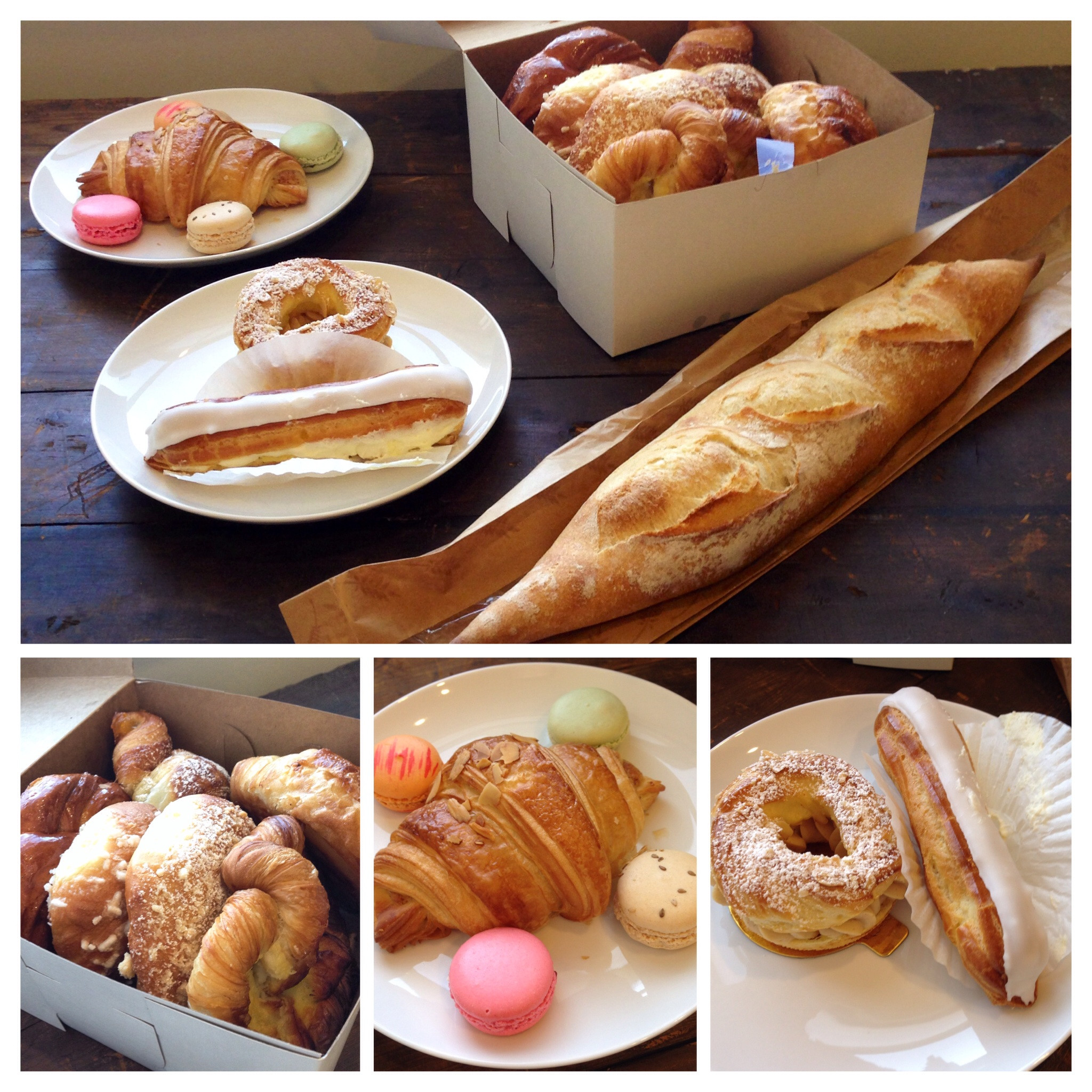 Sunday Josh and I woke up early to head to Le Petit Paris to pick up breakfast and goodies for our afternoon picnic. It was our first wedding anniversary, and we had a $24 Groupon to the French bakery that was expiring, so we figured what better time to put ourselves in a carb coma? $24 can buy you a lot of pastries, just FYI. (Josh has some very lucky co-workers.) We decided to sample little bits of everything over Chuck episodes. And then we exchanged our anniversary gifts. 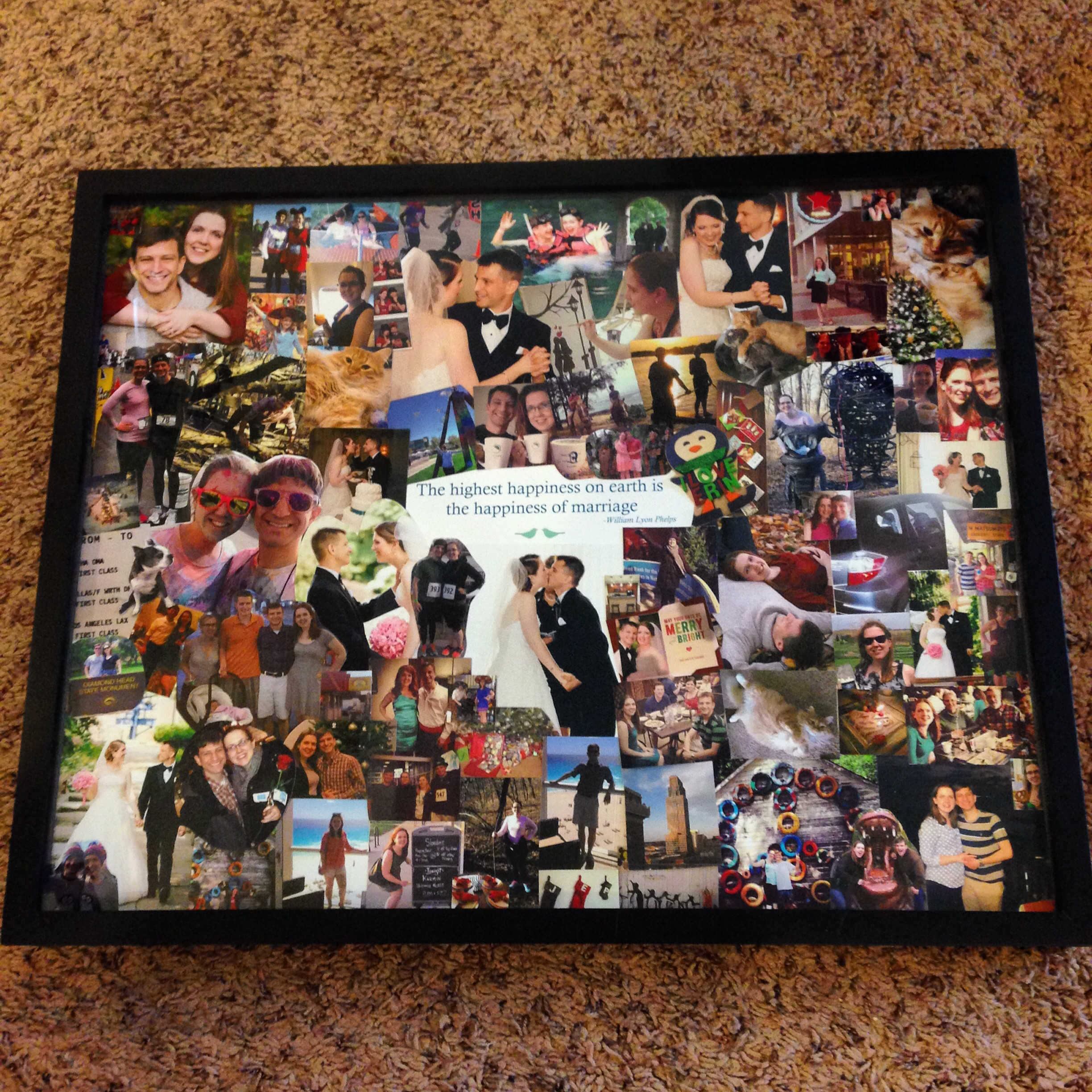 Josh’s gift to me was a photo collage of our first year of marriage. Seeing all these photos brought back such happy memories. I turned into an emotional mess when I saw how much care and thought he put into this. We’ve had such an incredible year.  I love how this perfectly compliments the photo collage he made me for our one year dating anniversary. He also got us an overnight stay at a local hotel. I’m looking forward to a staycation. 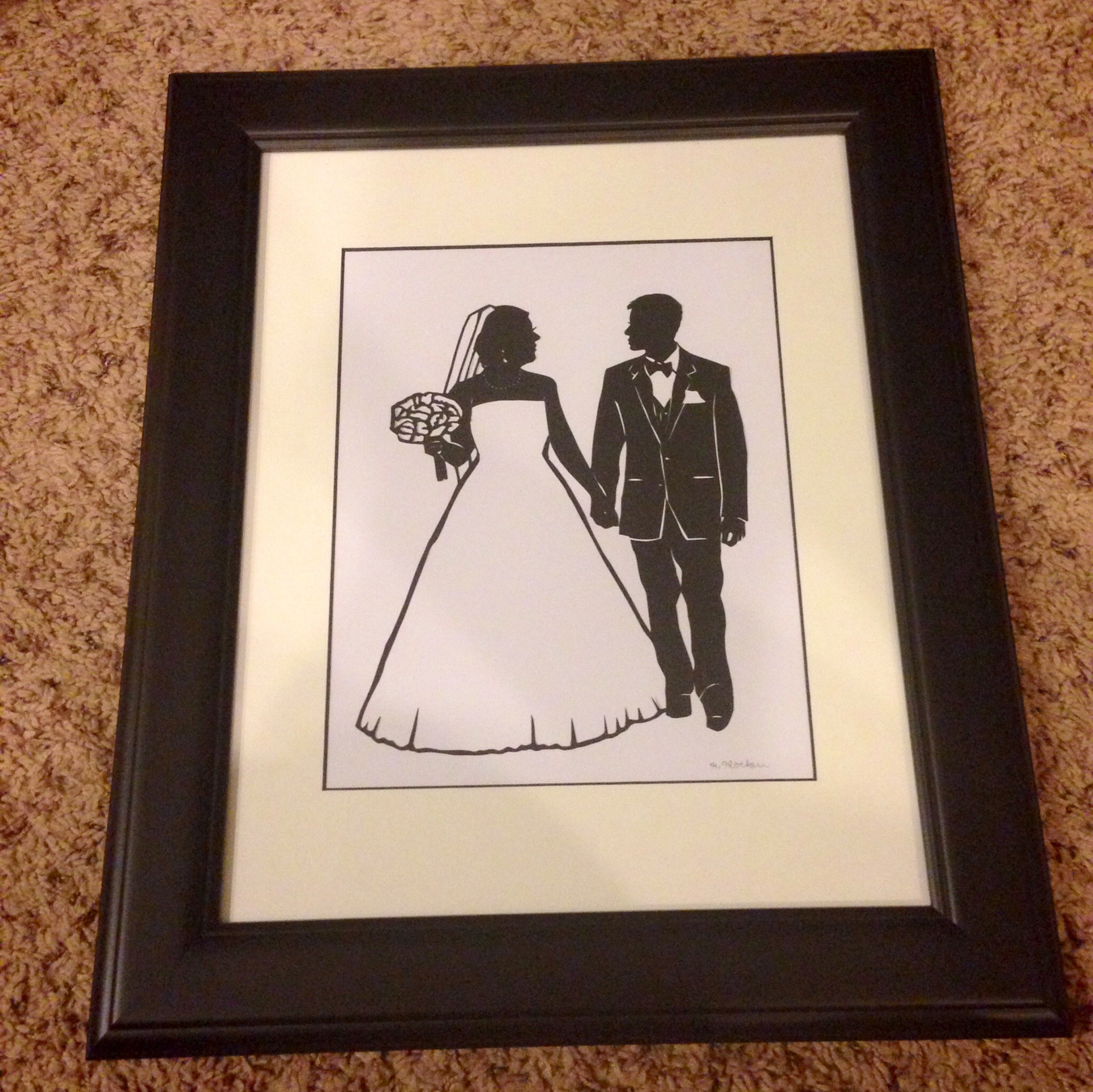 If you guys read my 1 year gift idea post you already know what my paper present to him was. I was so happy with how it turned out. And I’m so glad he really liked it too. 🙂 I’m looking forward to putting this on our photo wall, next to all the new photos we’ll have after our 1 year anniversary photo shoot next week. 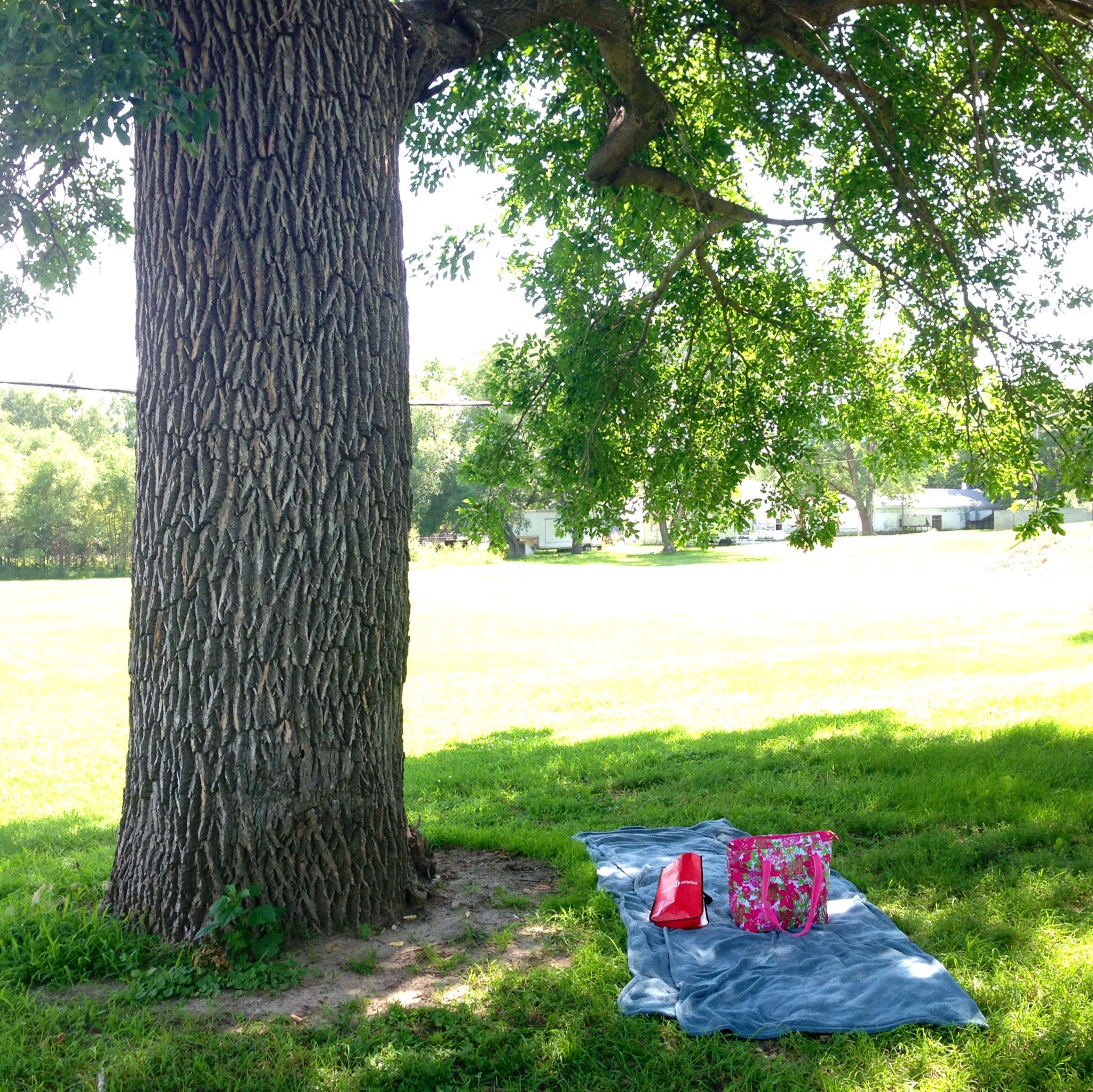 After exchanging presents Josh and I drove a half an hour outside of Omaha to Ashland. We want to visit more small towns in Nebraska, and this was the first on our list. When we got to town, we found a nice shady tree, parked the car, and had a picnic in a park. 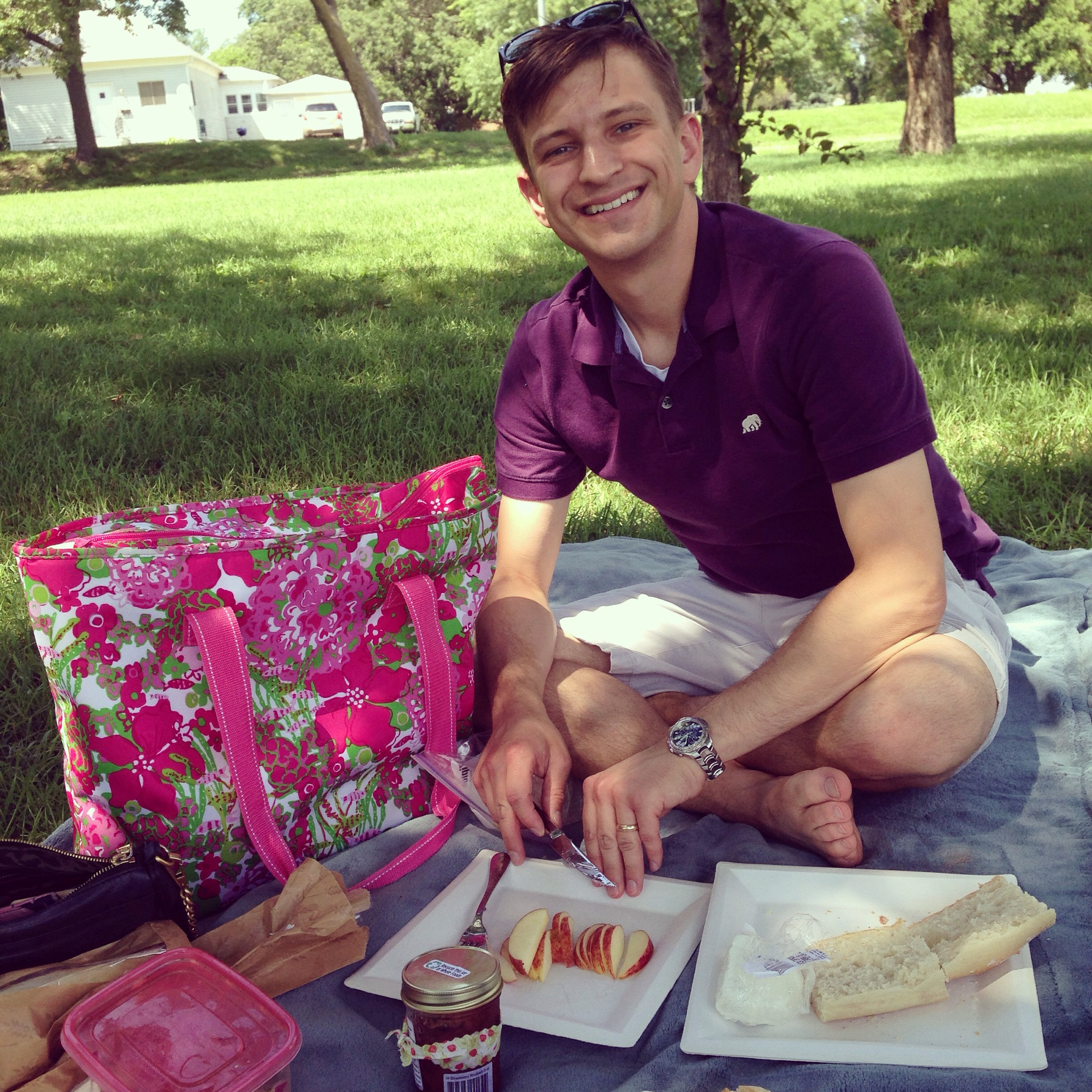 Josh introduced me to apple, cheese, and jam sandwiches. He’s had them with his family on vacations and road trips since he was little. They’ve become a tradition of ours. 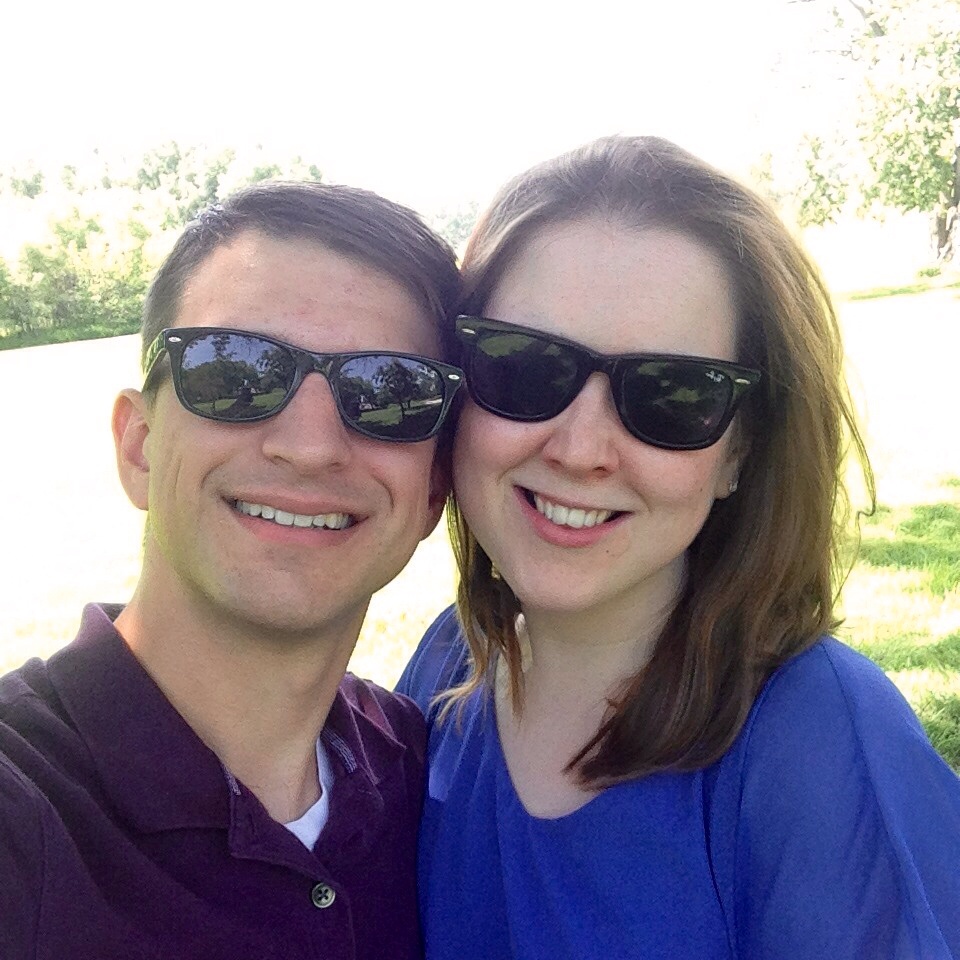 I could not have asked for a more magical year. 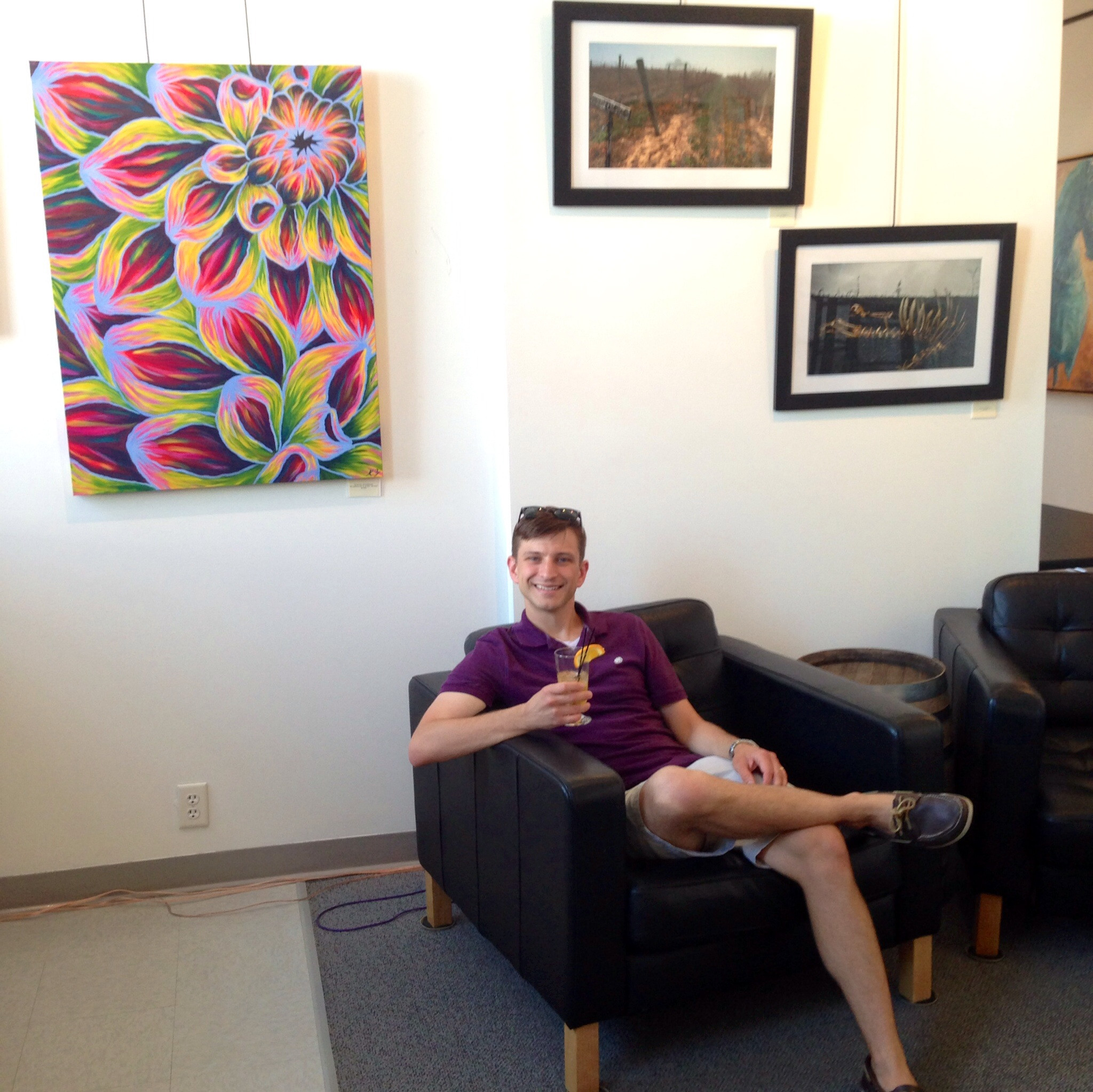 After our picnic we explored Ashland for a little while. We visited Glacial Till Vineyard where we were able to enjoy some sangria while we browsed their art gallery. 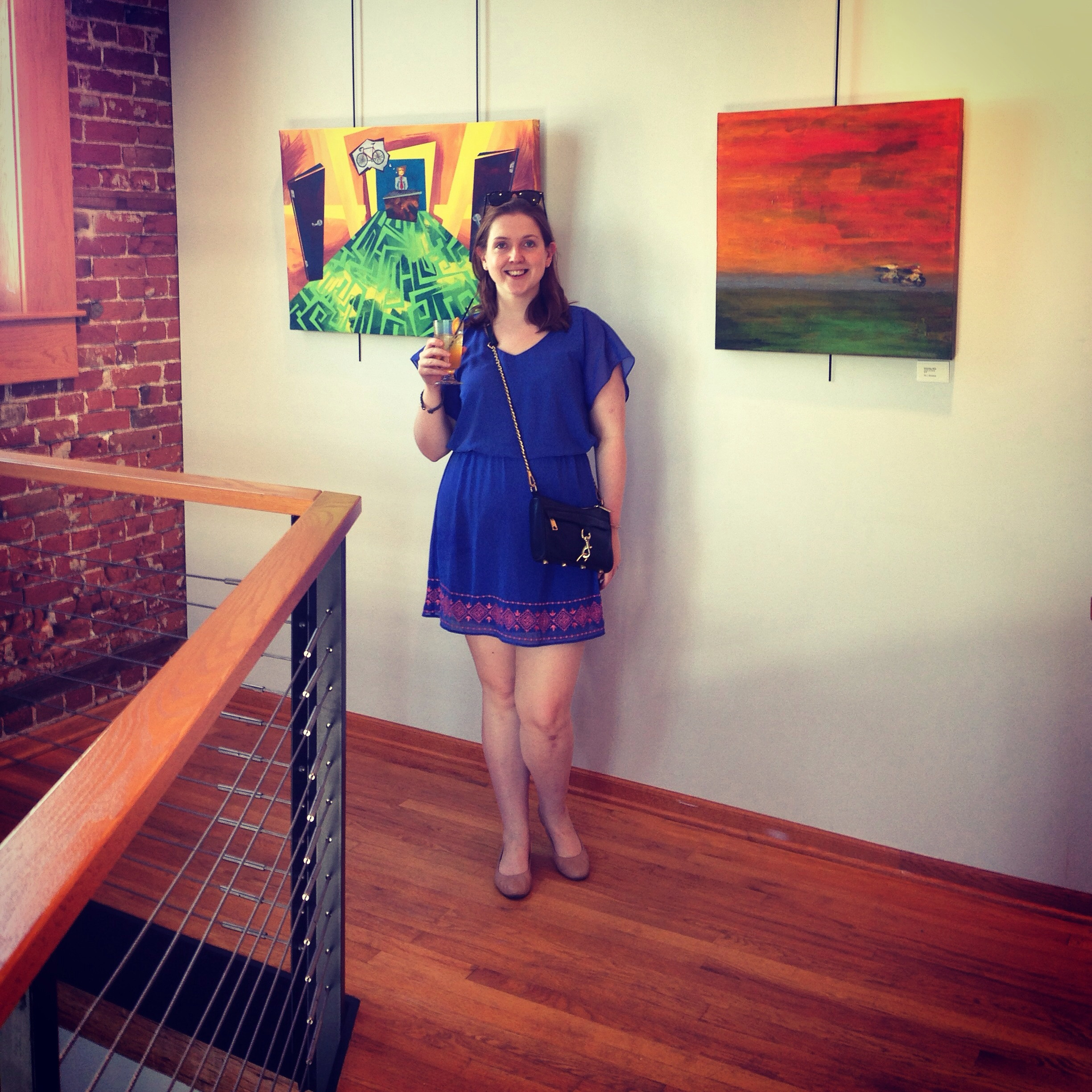 It was such a cool place. We definitely want to go back again. 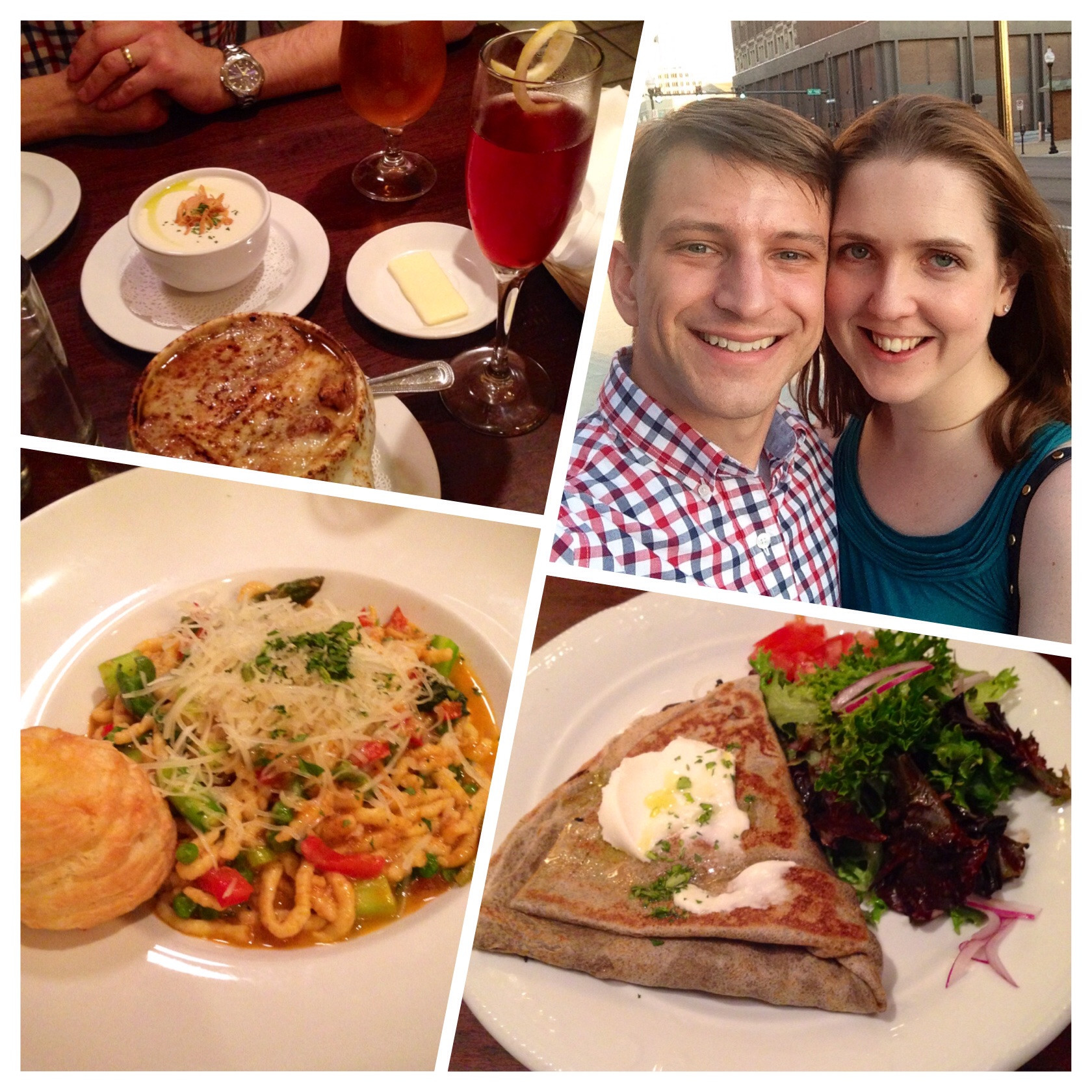 As much as we were enjoying Ashland, we had to head home to Omaha so we could make our dinner reservations. We decided to try Darios for the first time and were incredibly happy we did. Josh got chilled cauliflower soup while I tried the French onion. Both were wonderful. For our main meal I got the veggie spaetzle and Josh got the mushroom crepe. We decided to split them down the middle and try two meals at once. The crepe was merely okay, but the spaetzle was incredibly flavorful and delicious. We both want to go back and order that dish again.

After dinner we headed home to enjoy the last of our wedding cake! We wrapped the top tier up after our wedding last year. It was in my parents’ freezer for the better part of a year, until they overnighted it to us a few months ago. It has been chilling in our freezer here in Omaha ever since. We had no idea how it held up or what it would taste like, but we were surprised to discover it still tasted really good. While nothing could beat eating the cake fresh, it definitely did not taste like we were eating year old wedding cake. We were so happy that tradition lived up to the hype.

Questions of the Day: How did you celebrate 4th of July? Did you freeze part of your wedding cake to eat on your 1 year anniversary?